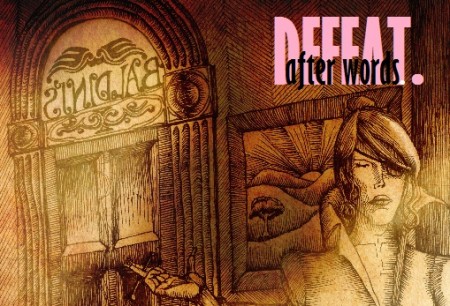 [DEFEAT. is a   coming-of-death novella. Brian Galiano lends his artistic talents to each episode. this is the post-coital cigarette.]

Rimina Jacoby sat in Bandini’s Café, leisurely smoking a cigarette and drinking coffee. Black. Bandini himself had tried to persuade her to try the espresso but she said she’d seen what it was capable of. And frankly, she laughed, she didn’t think it would be quite strong enough for her taste.

With her gray sleeves rolled up to her elbows, Rimina handled a newspaper. Her eye searched the front page, settling on the date. “Yes, yes, yes…that is when today happened.

The little bell above the door jingled. The Woman in Gray Robes didn’t look up to see who was entering. She already knew. She had planned on meeting him here, at this moment. In fact, years later she would tell him to make sure he was there so that they could palaver. As equals.

Or as close to equals as they would ever be.

He assumed the opposite side of the table, removing his trench coat and letting it rest on the back of his chair. He didn’t expect to receive it, but he awaited the greeting he thought he was due. A congratulations of sorts. Again, he didn’t expect it and didn’t wait too long before making his presence known.

Rimina peeked above the newspaper. “Of course I expected to see today. This is old hat. I just thought you’d be earlier.” She folded her paper and put it on top of a discarded plate. “But maybe that just proves that my way is better.” She chuckled to herself, amused by her own joke, and drew a sip from her coffee.

“Hey! That’s not funny! You know that that doesn’t prove anything!”

“Calm down, Mr. Wizard! I’m just teasing you! No need to be so defensive.” Trying to offer an apology without coming across as soft, the clairvoyant saw an opportunity to demonstrate her prowess. “You need to eat something. Here, have a bagel.” Out from under the newspaper, Rimina Jacoby slid a plate that had been empty only seconds before.

“Clever parlor trick,” the man conceded. He picked up the bagel, rivulets of butter running off, and ate greedily. He couldn’t help but look at the woman before him — his friendly competition — with admiration. She, on the other hand, couldn’t have been less interested and smoked another cigarette with ease.

“Stop staring at my eyepatch. It’s impolite. Even I know that, and I’m a gypsy.”

“I’m not staring! You know I’m not! Stop trying to make me feel like a fuckface!”

Again, he had taken the bait. She offered her reassurances. “My friend, you really need to relax. I’m just joking. It is acceptable to take a few moments to enjoy ourselves on this most significant of days. Trust me. Next time you live through it, you’ll see.”

The man remembered the truths she had delivered to him before. He acquiesced. “Fair enough. But cut me a break, I just saw the most important event of my life. For the second time.”

Rimina’s eye lit up. “So you watched? I wasn’t so sure you were going to.”

“I did. I watched through an open door in gymnasium, the one I remember him entering through. I wasn’t going to watch, either. I spoke with him as he was on his way to Event Zero. So many memories came rushing back to me — I felt things I hadn’t felt since I was sixteen years old.” He craned his head back and covered his eyes with his palms. “For a second, I thought it’d be too much. To relive it. Even though I know that it made everything Buckley and I have — or will — ever accomplish possible.”

“You don’t really believe that, do you?”

“Yes. And no. Every sequence I’ve charted, every chronological strain I’ve managed to secure has identified this moment as the Event Zero. So when I break it down, there’s no other explanation for what we’ve managed to do. What anyone’s managed to do, really.”

“And yet…and yet I can’t help but feel that Daryl Millar himself would call bullshit on my theories. Even though he secured his own spot in infinity, I’m sure he would have no qualms about downplaying its significance.”

Rimina was interested in what her peer — for that’s what he now was — had to say. Truly interested. “So, now that you’ve been given your second glimpse, returning to the point of origin, per se, what do you think? Did Daryl Millar stab himself in the heart in vain? Was his life cut tragically short for a purpose, or was it a mistake? Was his death necessary for our Universal Machine to keep moving? Was what you just saw — again – tragedy or triumph?”

It took a minute, but he came to a conclusion. Deliberately, each word caressing his idea, he offered his hypothesis. “I think…when it comes to what Daryl did for us…He walked us to the doorway. Hell, he even unlocked the door. But we took it upon ourselves to cross the threshold.”

The Woman in Gray Robes finished her coffee and her cigarette. She stood up and was joined by the Man in the Gray Trench Coat. Arm in arm, they left the café. A genuine gypsy mystic and a tireless American physicist. An artist and a scientist.

Together, they strolled into the wonderfully nebulous. Into the world, which is gray and constantly changing and full of the possibilities that others have provided.

It’s a beautiful place, if you take it upon yourself to cross the threshold. 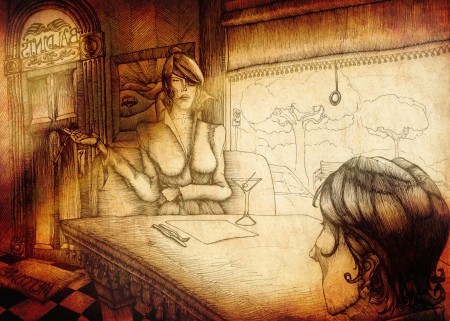 Tags: 8-Bit, after words., Bandini's Cafe, Brian Galiano, Rimina Jacoby, the man in the gray suit, The Woman in the Gray Robes