Archives
« Macho Man Randy Savage Dies In A Car Accident, The World Is Lesser.
Face of a Franchise: Betty Ross » 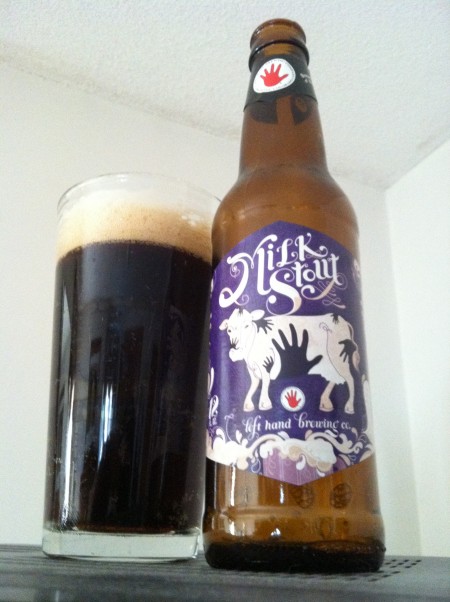 Say what you will about his latest exploits, but I believe that the good Arnold Schwarzenegger has done for the world far outweighs the bad. First, he pushed the limits of the human physique (albeit with steroids), proving that science can even be used to improve the doughy mounds of flesh that we call our bodies. Then Arnie took it upon himself to redefine action movies. Hell, just think of all the great Schwarzenegger flicks – The Terminator, Predator, Total Recall, Conan the Barbarian, Kindergarten Cop, True Lies, and so many more.

But most importantly, Arnold gave planet Earth this ostensibly obvious bit of wisdom:

But what if it were possible to drink milk and beer? Oh snap! And what if both could be imbibed at the very same time? Wowie-ZOWIE! Well, this is the thought behind the Left Hand Brewing Company’s Milk Stout.

To be fair, the brewery isn’t claiming to have fed cows just the right combination of hops to make delicious golden ale flow freely from their udders. Instead, the idea is that adding milk sugar to a stout will create a wonderfully rich and mild beverage. Inspecting the packaging of my sixer, I noticed this explanation:

“Milk sugar in your stout is like cream in your coffee. Dark and delicious, America’s great milk stout will change your perception about what a stout can be. Preconceived notions are the blinders on the road to enlightenment.”

Ditching preconceived notions? Redefining perception? Drinking beer? Oh shit, how could I not be sold on this beverage? It was without a second of hesitation that I snatched up these brews and offered them refuge in my fridge. But alas, the refrigerator is but a pit stop on the way to my tum-tum! So let’s drank!

Milk Stout pours with ease, generating an almost smokey aroma. The smell reminds me of the morning roast brewing up. Holding up the glass, I saw that the stout is a black hole, threatening to suck in the mahogany galaxies on its edges. Additionally, a formidable off-white head formed, reminding me of the overpriced cappuccinos I buy about twice a year. Delectable.

In terms of actual flavor, I have to say that Milk Stout is a goddamn stud. The beverage is certainly a stout, dark and rich and full of flavor. However, after drinking there is a hint of coffee floating around my mouth. I think that this might be to the beverage’s advantage, giving it an anchor that makes it more appealing to a wider audience. Moreover, the drink is especially smooth and drinkable – I’ve put two away while writing this review and I’ve hardly ruined my appetite.

I think that Arnold Schwarzenegger has done a lot of awesome shit in his time. But, he’s also fucked an ugly nanny and semened a lovechild that will ruin his career for awhile. So with that in mind, I’m not going to put too much stock in Arnold’s idea that milk has to be forfeited for beer. The folks at the Left Hand Brewing Company have proven that the two can peacefully coexist.

Milk Stout has run the Friday Brew Review gauntlet. And the grade is…