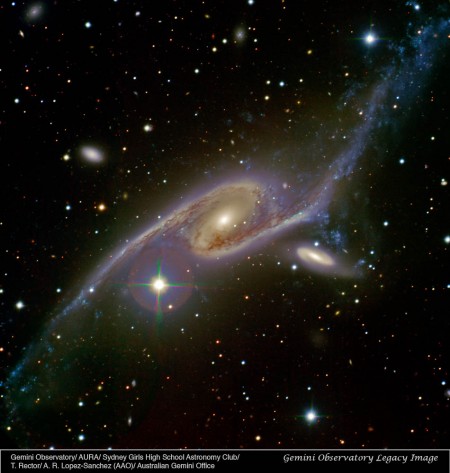 That enormous glob of cosmic gorgeousness in the middle of the above picture? It’s  NGC 6872, a spiral galaxy. It’s not just any spiral galaxy, though.  NGC 6872 is currently taking an ass-whupping from the smaller galaxy to the right, IC 4970.  The two sons a bitches are colliding, and it’s a tussle spanning hundreds of millions of years.

The two are undergoing a galactic collision, a colossal event playing out over hundreds of millions of years. NGC 6872 is currently the victim here; its spiral arms are clearly distorted and being flung wide by the gravitational interaction. However, the smaller IC 4970 will be the ultimate loser in this battle: it will fall into the bigger galaxy, be torn apart, and eventually consumed in its entirety, becoming a part of NGC 6872.

And you thought your feuds lasted awhile. Naw son! Naw!