Arnold Schwarzenegger and Stan Lee Developing ‘The Governator’ For TV and Comics. 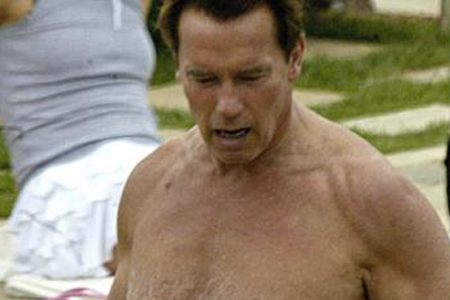 BASK IN THE DELIGHT THAT IS OUR CULTURAL APOCALYPSE. For sometimes it dredges up certain bullshit filth vomit that will still manage to entertain me. I will stamp in the puddles of filth that is our collective cultural consciousness, giggling as the fecaltainment splashes into my mouth.

Latest example?  Schwarzenegger and Stan Lee are developing  The Governator. 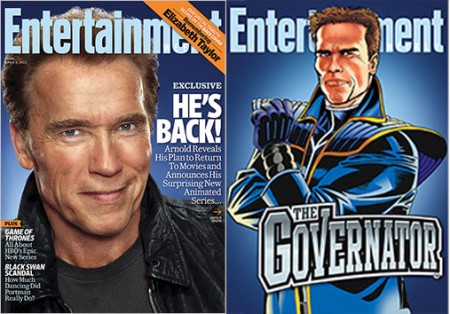 He’s been a famous body builder. He’s been a killer cyborg from the future. He’s been Governor of California. And now, in this week’s exclusive cover scoop, Arnold Schwarzenegger reveals his plans for the next phase of his extraordinary career: He’s going be a cartoon superhero, known as The Governator. “When I ran for governor back in 2003 and I started hearing people talking about ‘the Governator,’ I thought the word was so cool,” Schwarzenegger, 63, tells EW in his first press interview since leaving office last January. (Watch an EW-exclusive video of Schwarzenegger talking about the project.) “The word Governator combined two worlds: the world of politics and the movie world. And [this cartoon] brings everything together. It combines the governor, the Terminator, the bodybuilding world, the True Lies…”

The animated TV show and comic book, being co-developed by no less a superhero authority than Spider-Man co-creator Stan Lee (pictured, right), won’t be out until next year, but this week EW offers an exclusive early look at Arnold’s cartoon alter-ego. “The Governator is going to be a great superhero, but he’ll also be Arnold Schwarzenegger,” Lee says of the semi-fictional character. “We’re using all the personal elements of Arnold’s life. We’re using his wife [Maria Shriver]. We’re using his kids. We’re using the fact that he used to be governor. Only after he leaves the governor’s office, Arnold decides to become a crime fighter and builds a secret high-tech crime-fighting center under his house in Brentwood.”

Along with the Arnold Cave, the Governator will have a fleet of super vehicles at his disposal, a closet full of “Super Suits” that allow him to fly and perform other super stunts, and a team of colorful sidekicks, such as Zeke Muckerberg, the precocious 13-year-old computer whiz who acts as the Governator’s cybersecurity expert. Naturally, there will also be recurring supervillains – including an evil organization called Gangsters Imposters Racketeers Liars & Irredeemable Ex-cons (or G.I.R.L.I.E. Men, for short). For Schwarzenegger, the cartoon is obviously the next best thing to being President. “I love the idea of a control center below my house with a path so that boats and submarines can go right into the ocean,” he tells EW. “In the cartoon, my house is much closer to the beach than where we live, but, you know, it’s a cartoon.”

The Arnold Cave? Jesus Christ. “Lee” must have really wracked his fucking brains for that one. Girly men? So now Arnold is co-opting the SNL skit that used to shit on him? This is post-modern appropriation madness. Fuck all of this.  Arnold Schwarzenegger sucks now. Stan Lee’s sucked for a long time too. He’s just a name that is dragged out every so often by what is assuredly his Estate. They thaw him out of cryo, have him sign something, then stuff him back into the storage unit. This whole thing is going to suck.

I’m going to love it.