The Sun Turns A Detached Prominence Into Art. 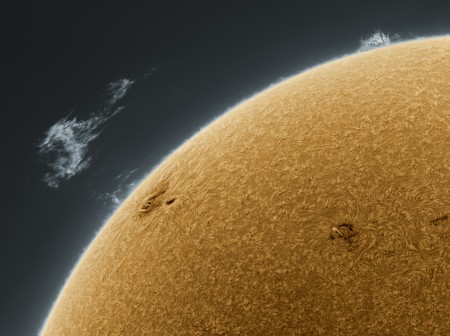 You’re not hallucinating. Or maybe you are. Regardless, the above is a fucking stunning picture of the Sun. Taken by Alan Friedman, it features all sort of technological and photographic wizardy to pull off. While the genius works, us proles can clap our meaty hands.

Alan used a filter that lets through only a very narrow wavelength of light emitted by hydrogen (called HÎ± for those of you keeping track at home), so this tracks the activity of gas on the solar surface. He also inverts the image of the solar disk (makes it a negative) to increase contrast. Somehow this adds a three-dimensional quality to the picture, and reveals an amazing amount of texture. I swear I had a rug in my bedroom growing up that was this texture (though somewhat cooler and less burny).

The scene-stealer is that detached prominence off to the left. That’s the leftover material ejected from the Sun by an erupting sunspot (you can see other sunspots in the picture as well). The gas is ionized – a  plasma – and so it’s affected by magnetic fields. The material follows the magnetic field of the Sun in the explosion, lifting it off the surface and into space. Sometimes it falls back, and sometimes it leaves the Sun entirely. In this case, Alan caught some of the material at what looks like the top of its trajectory.

The beauty of this picture belies its violence and sheer magnitude: the mass of material in a prominence can easily top  10  billion tons! As for size, see that dark elongated sunspot near the base of the prominence, just to the right of the bigger, speckly one? That spot is roughly twice the size of the Earth.

The Sun is enormous. It is all swank as well. Visit Alan’s site for more gorgeous photography.