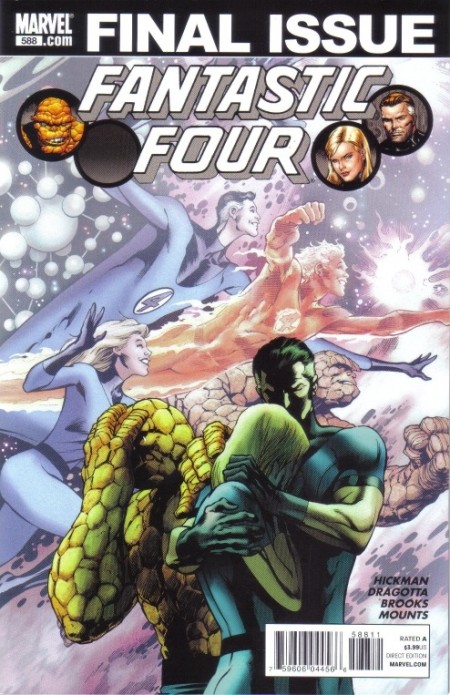 At this point, it’s old news: Johnny Storm bit the dust. All that remains of the Human Torch are embers, flickering reminders of a hero that lit up the Marvel Universe for the better part of fifty years. Dedicated readers of OL know that both my brother and I have been wholly enamored of Jonathan Hickman’s Fantastic Four epic. In addition to covering nearly every Hickman-penned issue, I sang praises for The Last Stand of Johnny Storm and then Caffeine Powered offered his own pontification.

So at this point, one has to wonder: can anything else be said?

In reading what is being billed as the final issue of Fantastic Four, it’s clear that Hickman has nothing else to say.

But he’s got plenty to show.

Fantastic Four #588 takes the reader through the month following the Human Torch’s sacrifice, starting with the moments immediately after the portal closed.   And as is often the case in our own lives, there’re no words to adequately describe the sense of loss. The only words summoned by Hickman’s script are the indicators which let the reader know which day in the Month of Mourning they are viewing. Instead, the grieving is illustrated, shown on the sullen faces of Johnny’s friends and family.

I think the omission of narration and dialogue is a fuggin’ genius move, as it thrusts the reader right into the midst of the emotional turmoil. We don’t need Ben Grimm to tell us, “It’s gonna be crumby widdout Johnny,” because we see the tears streaming down his orange cheeks. In place of Sue delivering a monologue about how her husband’s pioneering spirit carries unquantifiable risk, we watch her put up a forcefield when Reed tries to comfort her. Does Mr. Fantastic eloquently rebuke Annhilus’ forces? No, but he peers into the Negative Zone and gasps in horror as a would-be invader taunts him with the tattered remains of his brother-in-law’s uniform.

And without failure, every image breaks our hearts a little more.

To be fair, though, the credit for this comic’s success has to be awarded to fill-in artist Nick Dragotta. Every expression is affective, every panel poignant, and every character casts out a line that gets tangled on the heartstrings. Between the just-too-late rescue attempts and somber memorial services, this issue’s cast features an enormous array of Marvel’s finest; fortunately, Dragotta treats every single figure with the care and respect that fanboys demand. Such meticulous dedication can be found on the Day 5 page, a splash of the memorial service in which astute readers will see Logan nursing a bottle of booze and Luke Cage cradling his baby.

It’s inspired stuff and Dragotta is deserving of accolades.

But the scene that hits me hardest is Day 26. Ben Grimm is out in the desert, ostensibly trying to clear his mind, when he is joined by Donald Blake and Bruce Banner. Although they try to comfort their friend, Grimm lashes out. Needless to say, Blake and Banner give way to Thor and the Hulk, respectively. The Thing tries to start an old fashioned slugfest, and his friends are there to absorb the blows. When he runs out of steam, Ben breaks down, crying in the arms of his companions. I felt myself getting choked up, as the tacit exchange demonstrates such a penetrating truth.

Even the most monstrous of men are fragile.

So where does the conclusion of Fantastic Four leave us? Well, those four cities are still on the brink of war, Reed Richards may reform the council consisting of his other-dimensional counterparts, all hope can still lie in Doom, Nathaniel Richards is still time-hoppin’, and the Future Foundation is going to carry on. I haven’t felt this optimistic about a comic, both in terms of the story itself and the creative team, in a long time. Maybe even ever.

Johnny Storm’s dead. So is the Fantastic Four. But that doesn’t mean all is lost.

We must move on.