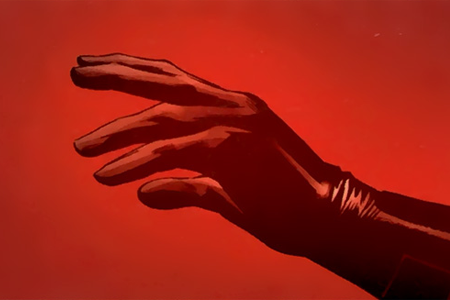 [The Brothers Omega are way late on the FF #587 tip. Apologies.]

I can understand the consternation people feel when fucking offing characters. I get it. I’ve been embittered by it. You kill off Jean Grey. She rises. You kill off Magneto. He’s back. You off Spider-Man. Whatever.

I really get it.

But this storyline felt much different. It didn’t feel driven by an editorial mandate. Maybe it was, but we’ll never know. It didn’t feel that way, and that’s what matters. Hickman didn’t off Johnny Storm on a whim. He was meticulous in building towards this climax.

The great irony is that when the nucleus of the First Family split up and went its separate ways, it was the two Best Friends who had to stem the tide of the actual threat. Saving Nu World turned out to be incredibly easy, and Sue Storm stemmed her problem with a fucking pimp slap.

Call it a cautionary tale on letting your family fall apart, whatever. Johnny Storm and Ben Grimm had to save the future. No Great Mind, no Invisible Woman to help them out. The Future Foundation lived because Johnny Storm took on Billion to One Odds.

It’s a typical trope, but it’s still to be loved. The wise crackin’ smart ass turns out in a moment of redemption to have more spirit than previously thought. Maybe it’s why we love it so much. To know that deep down inside all of us, perhaps, lies the ability to make the ultimate sacrifice. Or maybe we love it so much because it is a courage we ourselves could never fathom.

Fuck yeah, Johnny Storm will be back. But when Hickman’s plot finally climaxes in this: 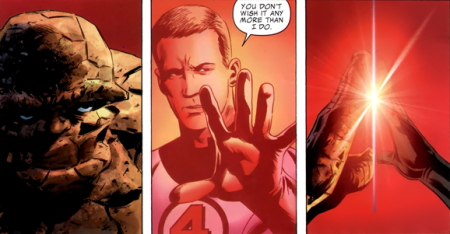 I’ll be goddamn if it didn’t punt my stomach to the floor.

Just as much pop should go out to Steve Epting, who fucking crushed it this issue. The paneling was gorgeous, and Hickman really let him summarize some truly poignant shit in pencils alone.

There isn’t any heavy handed exposition in the above panel. There’s almost no dialogue, and its up to Epting to carry the emotional gravitas in his visuals alone.

Cut to Storm’s final words, his bravado bleeding through. Even as he faces certain (for now) doom, Storm can’t fucking help himself. He goes out like a genuine fucking bad ass: 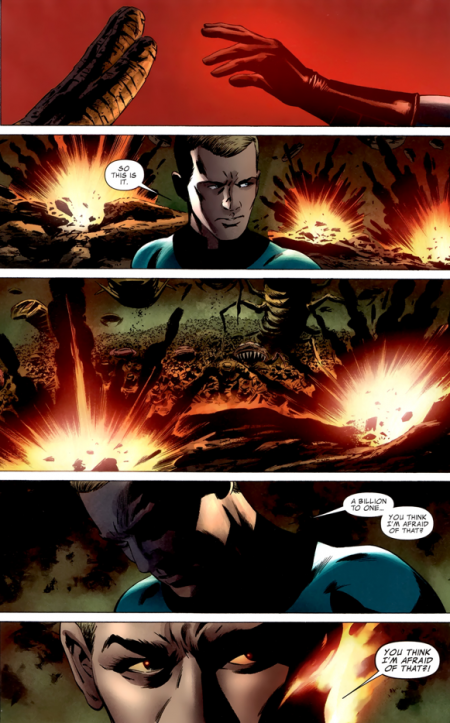 Except this time, Johnny’s bravado isn’t being used to pick up chicks. Or crack wise at his Orange-Cocked best friend. No, it’s to save the fucking world.

I can’t remember a time when a superhero’s death has affected me like this one did. I’ve read a lot of comic books in the last fifteen or so years, and nothing has left me flabbergasted or moved like this shit. I can understand why someone may be too jaded to appreciate it.

For me, the final pages of #587 get me around the sac like nothing has done in a long, long time. It’s reminds me of the first time I finished Preacher, and Dillon dropped that splash page of Jesse and Tulip on horseback.