Archives
« Darren Aronofsky’s Batman Pitch To Be Made Into Comic/Movie. Maybe?
Sci-Fi Flick “Love” Is Space Odyssey Meets Tom Delonge. Yet It Might Work. » 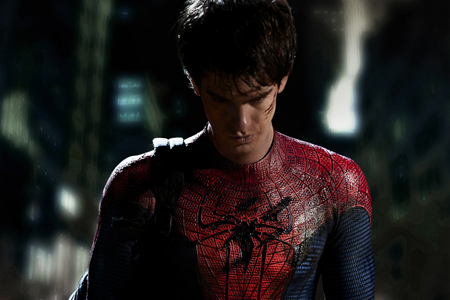 Hey dickhead dorks. Yeah, you. The ones that gripe. You can scratch something off your list of Infinitely Long Things to Bitch about. The new Spider-Man flick by Marc Webb starring Andrew Garfield is bringing back web-shooters. Praise Allah! Right? The confirmation comes from Emma Stone dropping an interview with MTV. Hit the jump for the details.

According to Slashfilm, “MTV asked Emma Stone at the Golden Globes, and the  Spider-Man co-star confirmed that the silver discs are “a device.” The interview is below.

Oh my gosh! My unsolicited take? Who fucking cares! I never got the hoopla about the Sam Raimi flicks having the webbing be a natural product of Parker’s mutation. Let’s see. The kid is bitten by a radioactive spider. Okay. He gets super-strength. Okay. He gets a spider-sense. Okay. He can stick to walls. Okay. But then they let him shoot webbing and it’s OMFG HERSEY.

Dawg, you kidding me?

I don’t give a shit either way. In fact, if I had to lean someway, it would be with the organic web-shooters. Heretical, I know. However, if this will silence the more niggling portions of the dork community, I’m cool with it.