Archives
« Epic Games Takes You Into The Shower For Bulletstorm.
Call of Duty To Add Premium Online Multiplayer? Frak. » 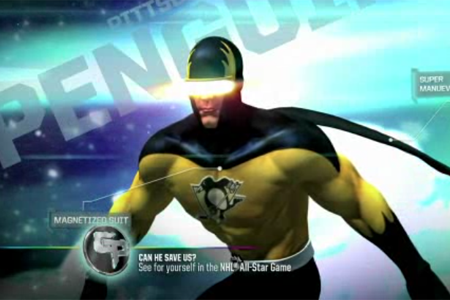 I am a big hockey fan. I am. Which is why I can say with  assuredness that almost every idea the NHL has is fucking awful. Okay, I’ll acknowledge that the Winter Classic is choice, and this year’s documentary leading up to it was also stellar. But as an organization, it is routinely obvious why they lag behind everything else here in the United States.

File this under: yet another amazing disaster in the making. The NHL and Stan  Lee have teamed up to create 30 unique superheroes under the title the Guardian Project. Comics Alliance quotes NHL.com which explains it as a “creative concept that organically and authentically incorporates various NHL elements but is not set in the world of hockey.” Oh, now I gotcha. A creative concept that organically incorporates the NHL and superheroes. How didn’t someone already think of this shit? Yup, this is going to breakdown the boundaries and get this sport back into the spotlight. Or, more than likely, it’s going to get two douchebags on Sportscenter talking shit as they fade out in some “Not Top Ten” list at the end of a segment.

Today, the first two superheroes were dropped. And good lord are they as awful/amazing as you could hope for.

First up is the Pittsburgh Penguin. This stunning douche looks like Cyclops if he got hooked on meth after getting dumped by Emma Frost and thrown out of the X-Mansionplace after drunk riding Xavier’s wheelchair around the grounds. Now he sticks to the mall, posing for pictures and asking little girls if they would wear a red wig and call themselves Jean.

And secondly, we get the Los Angeles King. Oh, I get the concept now. The King is a bit better than Cyclops, uh, the Penguin, because he doesn’t come off as a flagrant rip-off of an existing character. Well, one that I can think of. Instead, he looks like the very essence of generic gladiator. But it’s cool because he has a giant fucking sword, and accelerated healing. Stop me if you’ve heard of a character with that before.

Oh boy. Let’s be honest. These weren’t designed by Stan Lee. I wouldn’t be surprised if Lee died three years ago and his estate Weekend at Bernie’s his ass around trying to collect on his name alone. These abortions were probably puked out by some intern pulling an all-nighter while stuck in art school.

I don’t actually hate the concept of bringing superheroes and professional sports together. But this is just blundering the entire fucking concept. Look at the NBA and ESPN magazine. They pulled a some Marvel crossover promotion at the beginning of the season, and it was great. Taking NBA players and throwing them into famous poses and covers while being drawn by actual Marvel artists? Awesome. The NHL is like the little brother who saw his older sibling do something cool and is desperately trying to replicate it. But instead of a legit promotion they hire the husk and enterprise of a man who hasn’t created anything relevant in god knows how many years and throw together some lame bastards that look like they’re from the character creation screen in City of Heroes.