The Riddler Is Totally In The Next Batman; Joseph Gordon To Play Him? 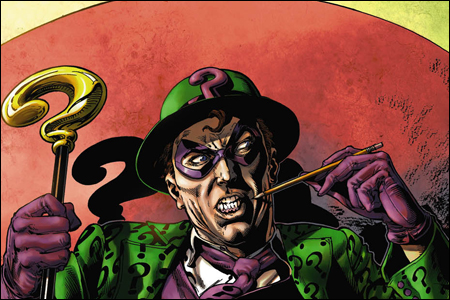 Holy fuggin’ shit, it looks like the Riddler is really going to be in The Dark Knight 2 / Batman 3 / Whatever. And more so, it looks like my wet dream of Joseph Gordon-Levitt playing him may be coming true. Get ready to e-masturbate:

There have been rumors of a JGL Riddler in the Batman sequel for some time. Today, FirstShowing got info from a source with a studio casting grid for Batman 3, so their report about the Riddler and Joseph Gordon-Levitt is more than pure speculation. In short, the casting gird is a data array with the roles in the film, possible actors, and scheduling needs. It shows talent availability and   which roles have actually been offered out. It can also be crucial in noting what actors can cover roles other then the ones they’re primarily wanted for.

So this info lists the Riddler, and has JGL as a primary candidate marked as ‘interested’. As FirstShowing says, don’t take this as any report that Levitt is in the film, but it may be a good sign that the Riddler will be.

Fuggin’ boom! Boners and cartwheels. I would fucking love this. My dickcrush broner (yes, broner) for JGL is reaching staggering heights. The idea of him being in the third Batman movie is enough to send me into fits of ecstacy. And in case you’re wondering what that looks like: lots of drooling, rubbing body parts, and kissing my computer monitor while Batman Forever loops in the background.

Let’s get this shit done.