Archives
« Views From The Space-Ship: Oh Gemma
Variant Covers: The Sentry Will Rip Your Ass In Half »

God of War III Impressions: Kratos Rapes The Eye-Sockets of Deities With His Fingers 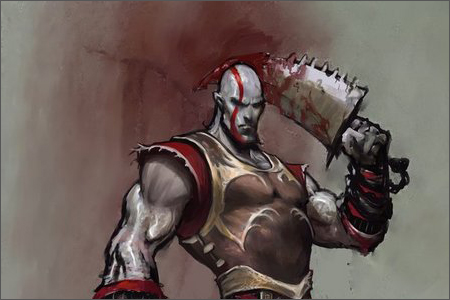 God damn, they weren’t kidding. The first thirty minutes of God of War III are fucking insane. I can’t describe the scope of what’s going on. You’re running around on motherfucking Gaia, throwing down with Poseidon. Blood and thunder! Whipping around climbing Gaia, fighting the Lord of the Seas. It’s not so much the graphics, though they’re pretty spectacular. It’s the amount of shit going down on the screen. Epic clash? Hells to the yeah, fools.

The climax of the opening sequence is fucking absurd, yo. Kratos rips Posey out of the guts of some water manifestation of his might, and really just lays down an ass-whupping fit for the God of War. Props to whoever came up with the idea to convey the ass-kicking from the perspective of Poseidon. There’s a point at the end where you’re viewing Kratos through the eyes of Poseidon gouging his eyes out. As Kratos’ thumbs close-in on the dude, you can’t help but feel it some extent. It’s such a visceral idea, that I have to tip my cap to the boys at Santa Monica.

It seems as though this shit is legit. I have a suspicion that this game like all the other God of War titles prior, as well as the Uncharted games, is going to rip its hugest load far before the end of the game. How do you open a game up with such pomp and circumstance, without having a let down by the finale? I’m not sure it is possible.

So far though? Kratos is fucking deities’ eye-sockets with his fingers, to their doom.