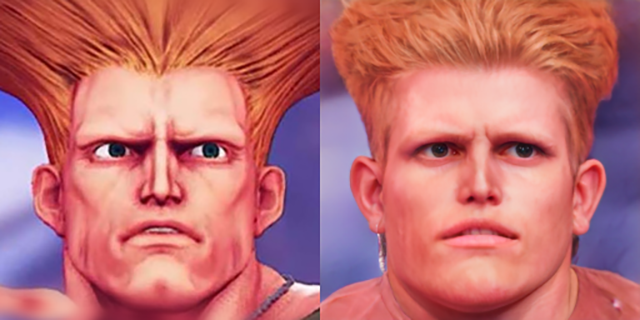 Some dude has used an artificial intelligence called StyleCLIP to give Street Fighter V characters human faces. The results are fucking mixed, but I’m deeply, deeply on board with Guile as portrayed by fucking Gary Busey.

Hit the jump for more info and the Twitter thread!

While Street Fighter V’s character roster is (mostly) supposed to look human, the game has never attempted anything like photorealism, instead opting for a cartoonish look. Let’s imagine just for a moment, though, that Capcom was trying to make everyone look real.

What you’re going to see here are the results of feeding the game’s character models through an artificial intelligence, called StyleCLIP, which is probably best described as, “Photoshop driven by text, with all the good, bad, and chaos that entails.”

StyleCLIP can do all kinds of weird and wonderful stuff with images, but one thing that folks have really been into lately has been feeding it pictures of fictional characters and seeing real human faces spat out the other end.

Siberian_644 (who got the images) and Final_Boss (who fed them to the AI) teamed up the other day to feed the AI a whole range of character faces to see what it could come up with. While in some cases (Laura, Vega, Chun-Li and Lucia) it does an incredible job, in others, it really does not.

See, the AI works best when it has a clear look at a whole face, and when it can easily find key identifiers of said face to work with. So the characters wearing hats, eyepatches and facemasks are a struggle, as are those with features like sharp teeth.

First one is Guile pic.twitter.com/LK7lKXZQUc