Archives
« NASA’s Curiosity Rover may be chilling right next to microbe burps on Mars.
‘PUBG’ getting animated “project” from ‘Castlevania’ producer Adi Shankar and this is how you get me to give a shit »

Jupiter officially has another motherfucking moon! 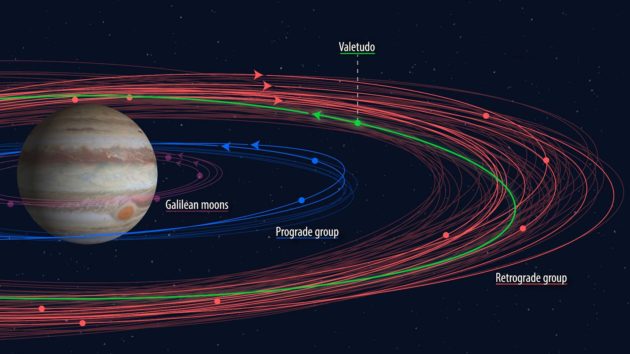 Moonspotting
It’s a big month for space: Jeff Bezos and Richard Branson both almost made it there, but more importantly we can announce the discovery of yet another moon orbiting Jupiter.

Jupiter already has dozens of moons — at least 80, with more being discovered all the time, Space.com notes. But even though it’s just another small space rock in the crowd, the new moon S/2003J24 stands out from the pack. That’s because it’s the first planetary moon to be discovered by an amateur rather than a professional researcher at a university or space agency, thanks to a self-proclaimed hobbyist named Kai Ly.

“I’m proud to say that this is the first planetary moon discovered by an amateur astronomer!” Ly told Sky and Telescope.

Peekaboo!
Based on Ly’s observations, which have been submitted to but not yet published in academic journals, it became clear that a space rock previously imaged by NASA in 2003 was actually a moon orbiting Jupiter as part of the Carme group. That’s a cluster of 24 space rocks that include a 28-mile-wide asteroid that got trapped in Jupiter’s orbit, along with 23 fragments that broke off from it, according to Sky and Telescope.

Even though NASA had images of S/2003J24, it was Ly’s efforts poring over years of observations from various telescopes that allowed her to discover, quantify, and confirm the moon’s orbit.

At the same time, NASA and other space agencies are currently developing bigger and better telescopes that could theoretically allow them to pinpoint the moons of exoplanets outside of our solar system. That’s certainly a valuable endeavor, but it seems there’s still plenty to discover in our own stellar neighborhood, too — even by someone who, as Ly told Sky and Telescope, was doing astronomy as “a summer hobby before I return to school.”