Archives
« FBI says Russian Hackers are to blame for shutting down much of US beef supply. What a weird fucking future, man.
‘Black Panther: Wakanda Forever’ reportedly casts Tenoch Huerta as Namor. Let’s see how this goes »

‘A Quiet Place’ Spin-Off Movie from Jeff Nichols is dropping in 2023. Okay, this could be dope. 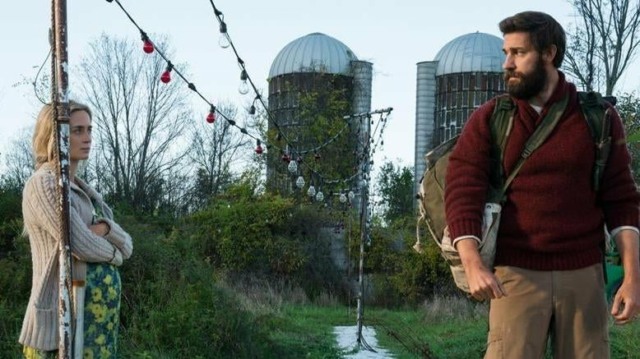 Fuckers, what do you do with a successful movie franchise? Milk its tits until death! The latest example is this shit: A Quiet Place is getting a spin-off flick dropping in 2023. That said, I’m actually pretty stoked. The first two movies are solid, and the director of the spin-off fucking rules.

After the success of two features in the “A Quiet Place” universe, it seems that an even fuller franchise is all but inevitable. Now, the world created by filmmaker and star John Krasinski is officially expanding to include a spin-off. According to The Playlist, Paramount Pictures has already set aside March 23, 2023 as the date for a new feature film set in the “A Quiet Place World” to be helmed by director Jeff Nichols.

The new film is not expected to be “A Quiet Place Part III,”, but is being described as a feature film broadening the landscape already detailed in Krasinski’s first two features, so expect a new crop of characters to be fighting the sound-based monsters. Nichols’ take on the material is based on an idea by Krasinski.

Rumors of a Nichols-helmed spin-off have been chattered about for months; last November, Nichols’ involvement was first reported by Deadline. With Krasinski’s latest proving to be a box office hit, it looks as if the studio is ready to move forward in an official capacity.

Lauded filmmaker Nichols is a strong fit for the material, as the “Quiet Place” films have a similar feel to Nichols’ past works, especially “Take Shelter” and “Midnight Special.” Director and screenwriter of “A Quiet Place” Krasinski has talked about how the films easily lend themselves to spin-offs, so this sounded set from the start.

The sequel grossed $4.8 million in about 3,000 theaters on its opening weekend and has received praise in big places. William Friedkin, the director of one of the most influential horror films of all time, “The Exorcist,” took to Twitter to sound his praise of Krasinski’s new movie starring Emily Blunt, Millicent Simmonds, Cillian Murphy, Djimon Hounsou, and Noah Jupe. “A QUIET PLACE 2 is a classic horror film,” Friedkin wrote on Twitter. “Cinema is back.”

IndieWire’s Kate Erbland also praised the film in her “B+” review that lends credence to future films with and without him. “Krasinski’s very real, very deep affection for the family he has placed in the middle of all this is what seems destined to keep truly growing. As his chops as an action and horror director have only increased, care of those natty set pieces and plenty of real ingenuity, Krasinski hasn’t lost sight of the human drama that makes it all work. Krasinski never meant to be a horror guy, but he’s always known what scares people,” Erbland wrote in her review.