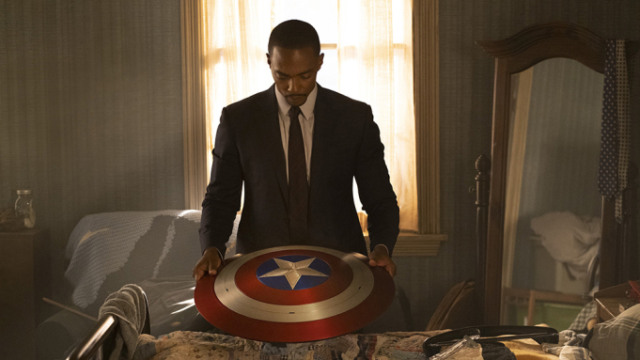 I suppose it makes perfect sense that there’s a Captain America 4 in the works. As well, I suppose it makes perfect sense that The Falcon and the Winter Soldier showrunner Malcolm Spellman is penning the script. That said, I gotta say — dude is definitely a step down from the Russo Brothers. At least for me. Don’t get me wrong, I appreciate the themes he tackles in Falcon and the Winter Soldier, but the writing itself on the series really doesn’t sizzle my tits. Perhaps being forced to narrow his focus for a two-hour movie will help him out tonally and pacing wise. We can hope. Right?

Malcolm Spellman is picking up Captain America’s shield once again.

No castings for the project are officially known but Friday’s episode offers plenty of roads for the feature to take. Up until this point, Chris Evans has played Captain America via the Steve Rogers character, appearing in a trio of solo movies, Avengers outings, and assorted Marvel movies. And the question of who is entitled to carry the shield or be Captain America was central to the show.

The feature is likely to continue the story of Sam Wilson, played by Anthony Mackie, and the current wielder of the shield. But as the writers get to work, it will interesting to see how the story unfolds with there now being multiple people who have been Captain Americas in the Marvel Cinematic Universe.

No director is attached and Evans’ involvement or return remains unconfirmed. Marvel was tight-lipped as usual.

Falcon and the Winter Soldier, which also stars Sebastian Stan as Bucky Barnes/The Winter Soldier, has earned strong critical and fan reaction. Spellman assembled a nearly all-Black writer’s room for the series, which has been praised for bringing the Black experience to the forefront not quite like any other superhero film or TV show before it. The series has tackled issues as every day as discriminatory lending practices, to the original sins of America building itself on the backs of Black people.

The series premiered March 19, to what Disney+ said was its biggest series debut ever, topping popular shows such as Marvel’s WandaVision and Lucasfilm’s The Mandalorian.

Spellman was previously a writer/co-executive producer on Fox show Empire and also acted as a consulting producer on crime show Truth Be Told before getting the chance to take the lead on Falcon. He is repped by CAA and Industry Entertainment.

Musson was the credited writer of what is considered among the strongest of the show’s installments, episode 5. He is a rising scribe whose previous credit was on Iron Sky: The Coming Race, an action thriller centered on Nazis on the moon. He is repped by Verve and Industry.