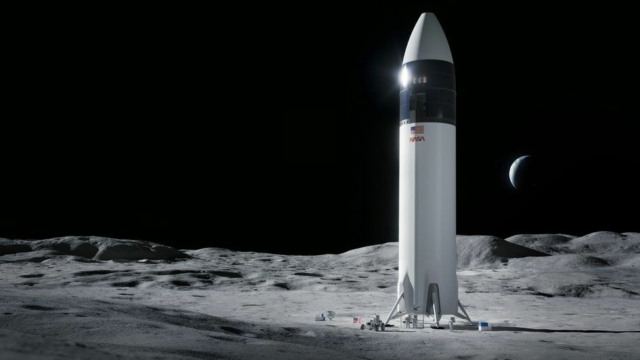 Hey man! NASA has chosen SpaceX to build their Moon lander, and why the fuck not? I’m sort of bummed everything is privatized these days, but that’s just the way it goes. At least we’re going to the Moon, baby! Hopefully in a non-exploding rocket or some shit.

Nasa has chosen Elon Musk’s company SpaceX to build a lander that will return humans to the Moon this decade.

This vehicle will carry the next man and the first woman down to the lunar surface under the space agency’s Artemis programme.

Another goal of the programme will be to land the first person of colour on the Moon.

The lander is based on SpaceX’s Starship craft, which is being tested at a site in southern Texas.

SpaceX was competing against a joint bid from traditional aerospace giants and Amazon founder Jeff Bezos, as well as Alabama-based Dynetics. The total value of the contract awarded to Musk’s company is $2.89bn.

“With this award, Nasa and our partners will complete the first crewed demonstration mission to the surface of the Moon in the 21st century as the agency takes a step forward for women’s equality and long-term deep space exploration,” said Kathy Lueders, the organisation’s head of human exploration.

“This critical step puts humanity on a path to sustainable lunar exploration and keeps our eyes on missions farther into the Solar System, including Mars.”

The Artemis programme, initiated under the Trump administration, had targeted a return to the lunar surface in 2024. But a shortfall in funding of the landing system has made that goal unattainable.

Elon Musk has been developing the Starship design for years. Resembling the rocketships from the golden age of science fiction, it is a crucial component of the entrepreneur’s long-term plans for settling humans on Mars.

For now, though, it will serve as the lander that ferries astronauts from lunar orbit to the surface.

With a spacious cabin and two airlocks, allowing astronauts to exit the craft for moonwalks, it’s a far cry from the cramped, spindly lunar module (LM) that carried 12 men to the surface under the US Apollo programme between 1969 and 1972.

The new vehicle will be known as the Human Landing System (HLS).

In recent times, Nasa has chosen more than one company when procuring space transport services, giving it options if one of them fails to deliver.