Archives
« Astronomers have spotted a black hole gliding through space. The cosmos don’t give a fuck!
Rockstar pays modder $10,000 for fixing ‘GTA Online’ loading times. Dude, I have the wrong skills. »

Ancient Biblical Texts discovered in a “Cave of Horror” and this is a horror movie waiting to happen! 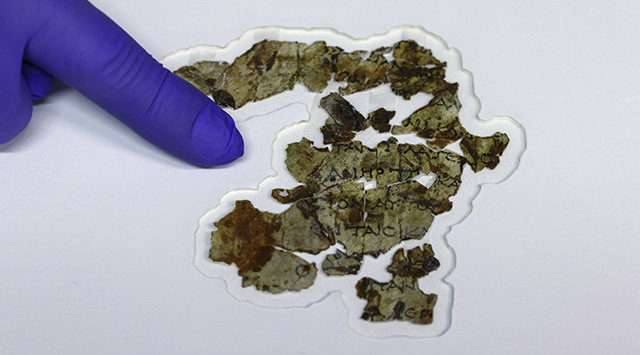 Listen, I just finished watching motherfucking 30 Coins. So I know a fucking Satanic Apocalypse waiting to happen, and that’s exactly what this shit happens to be! I mean, Ancient Biblical Texts? A fucking Cave of Horror? Let’s go! I’m tired of this realm, this flesh-bag, and the horrors of mortality.

Newly discovered fragments of the Dead Sea Scrolls, a collection of Hebrew texts that date back some 2,000 years, have been discovered in the “Cave of Horror” in Israel, so named because of the dozens of human skeletons found there decades ago.

The major discovery, announced by the Israel Antiquities Authority on Tuesday, represents the culmination of a years-long archaeological survey of the Judean Desert. The new parchment pieces are millimeters and centimeters in scale, and are the first fragments of the Dead Sea Scrolls to be recovered by professional archaeologists in about 60 years.

Dozens of partial scrolls were recovered during the recent expedition, including fragmented Greek translations of the biblical books of Zechariah and Nahum that were radiocarbon-dated to the 2nd century AD. The texts were likely stashed in the cave by Jewish rebels seeking refuge during the Bar Kochba Revolt, an uprising that capped off three major Jewish-Roman wars in antiquity.

In addition to the fragments, the archeological team discovered 1,000-year-old coins, the 6,000-year-old mummified remains of a small child and an intact basket that dates back some 10,500 years, making it perhaps the oldest artifact of its kind in the world, according to the New York Times.

“These finds are not just important to our own cultural heritage, but to that of the entire world,” Avi Cohen, CEO of the Ministry of Jerusalem Affairs and Heritage, told the Washington Post.

The bulk of the Dead Sea Scrolls were initially discovered and collected in the Judean Desert during the 1940s and 1950s. During that time, nearly 1,000 manuscripts were recovered from caves in the area, which originated across a range of roughly five centuries during the Second Temple period of Jewish history.

The manuscripts are considered among the most valuable archeological finds of the 20th century because they preserve some of the oldest iterations of what would eventually become the Hebrew Bible canon.

Archaeologists were able to piece together verses from Zechariah 8:16-17 from the new parchment pieces, which reads: “These are the things you are to do: Speak the truth to one another, render true and perfect justice in your gates. And do not contrive evil against one another, and do not love perjury, because all those are things that I hate—declares the Lord.”

The new parchment pieces, along with the full collection of Dead Sea Scrolls, can help biblical scholars and other specialists understand the evolution of the Hebrew Bible and other ancient texts, which have had an outsized impact on world history and culture.

“When we think about the biblical text, we think about something very static,” said Joe Uziel, head of the antiquities authority’s Dead Sea Scrolls unit, according to the AP. “It wasn’t static. There are slight differences and some of those differences are important.“

“Every little piece of information that we can add, we can understand a little bit better,” he concluded.