Astronomers have spotted a black hole gliding through space. The cosmos don’t give a fuck! 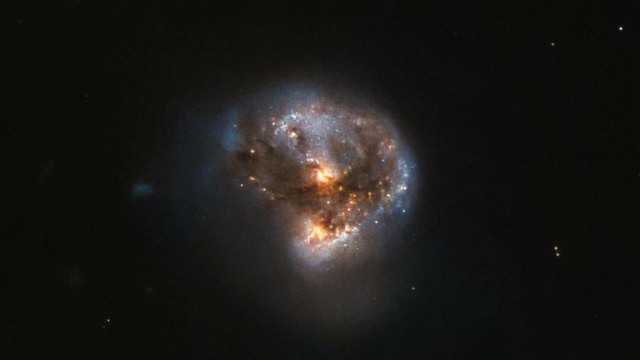 How is this for equal parts terrifying and amazing? Astronomers have spotted a black hole just straight strolling through space. Give it a wide berth, I don’t think that motherfucker breaks for cross-traffic.

Some 230 million light-years from Earth, there’s a black hole going places. These extraordinarily dense objects are usually found sitting at the center of a galaxy violently gobbling up matter, so it was a surprise when astronomers spotted this one moving out of step with its resident galaxy.

Containing more than 3 million times the mass of our Sun, the black hole was advancing across the cosmos at a 110,000-mile-per-hour clip, and its movement was detected by an international team of researchers, using data from Arecibo Observatory and Gemini Observatory. The new paper is a follow-up to data collected in 2018.

“My initial reaction to obtaining the result was that I had probably messed something up somewhere,” said Dominic Pesce, an astronomer at the Center for Astrophysics | Harvard & Smithsonian and lead author of the paper, in an email. “I had to go back through all of the analysis multiple times before I was able to convince myself that the measurement was reproducible given the data we had in hand at that time. But those initial tantalizing results have been bolstered by our updated measurements, which has been both reassuring and gratifying to see.”

Roaming around the center of galaxy J0437+2456, the black hole in question is enshrouded in a water megamaser, a galactic nucleus made more luminous by water molecules floating around in its accretion disc. This luminosity is detected in microwave lengths, which were recorded by the two observatories prior to the collapse of Arecibo’s main dish in December 2020. Pesce’s team looked at 10 water megamasers around supermassive black holes and found that only the black hole in J0437+2456 had this peculiar motion to it. The team found that just as the galaxy was gliding through space, so too was the black hole—but slightly slower than the elements swirling around it.

The difference in velocities could be due to a number of factors. One possibility is that this black hole formed from the merger of two smaller black holes; such a collision would leave the cosmic superstructure a little unsteady. Another is that the black hole is alien to its current galaxy, and its original galaxy is in the process of merging with J0437+2456. A third option, as outlined by Pesce and his team (and perhaps the most exciting), is that the water megamaser is in a binary system, and this is the one microwave-visible black hole in the duo.

Illustration for article titled Astronomers Spotted a Black Hole Casually Gliding Through Space
What Happens When Two Black Holes Collide?
On September 14, 2015, signals from one of the Universe’s most mind-boggling, powerful events…

Pesce said that the trajectory of the black hole would be different depending on the nature of its motion, but it would take tens of thousands of years’ worth of observations to calculate it for certain. And in any case, the work of understanding the black hole’s movement is made all the more difficult by Arecibo’s collapse, which has eliminated a key source of information for astronomers, cosmologists, and astrophysicists.