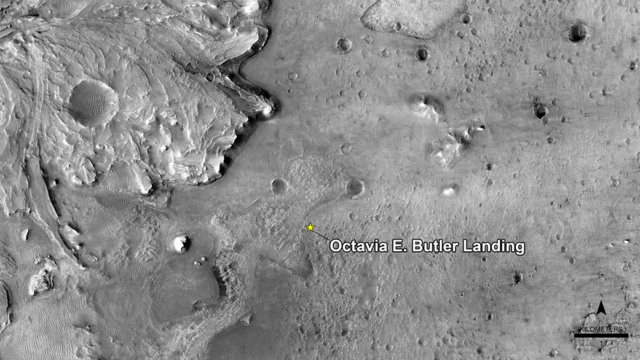 NASA has pulled a most radical move, and named the Mars Rover landing site after Octavia Butler. Fuck yes! Gimme all them science-fiction landmarks on Mars!

That magical spot in Jezero crater where NASA’s Perseverance rover made its historic landing last month has been named “Octavia E. Butler Landing” in honor of the late sci-fi author.

“I can think of no better person to mark this historic landing site than Octavia E. Butler, who not only grew up next door to JPL [NASA Jet Propulsion Laboratory] in Pasadena, but she also inspired millions with her visions of a science-based future,” Thomas Zurbuchen, NASA associate administrator for science, said in a NASA release.

Indeed, NASA got it right with this one, as Butler is a worthy choice for such a prestigious honor.

Butler, who died in 2006 at the age of 58, was the first African American woman to win the Hugo and Nebula awards and the first sci-fi writer to be honored with a MacArthur Fellowship. The acclaimed author is known for such works as the Xenogenesis trilogy and the Parable and Patternist series, in which she critiqued humanity’s hierarchical and prejudicial tendencies, especially those based on race, sex, and class.

“Butler’s protagonists embody determination and inventiveness, making her a perfect fit for the Perseverance rover mission and its theme of overcoming challenges,” explained Kathryn Stack Morgan, deputy project scientist for Perseverance, in the NASA press release. “Butler inspired and influenced the planetary science community and many beyond, including those typically under-represented in STEM fields.”