Archives
« Space Swoon: Mars’ Jezero Crater is a potential site for the Rover to investigate!
‘Spider-Man 3’ is officially titled ‘Spider-Man: No Way Home’ and it’s dropping this Christmas. Webtacular or some shit! »

Spike Lee is producing Lovecraftian movie ‘Gordon Hemingway & The Realm of Cthulhu’ for Netflix. Sign me the fuck up! 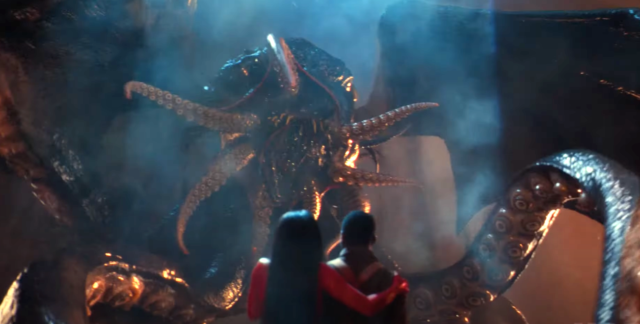 Wait, what the fuck? Spike Lee is producing a Lovecraftian horror movie? Indeed, and its titled Gordon Hemingway & The Realm of Cthulhu. You know, I never thought I’d see a world where Spike Lee was producing a Cthulhu flick. Given, you know. He’s Spike Lee. Not to mention Lovecraft’s racist as fuck history. But, I think it’s an interesting angle, directors of color putting their own spin and interpretation on the mythos. Perhaps to admire its wonders while interrogating its myriad faults. With all that in mind, I’m really, really excited for this project.

Spike Lee is sticking with Netflix after Da 5 Bloods. The filmmaker will produce Gordon Hemingway & The Realm of Cthulhu, a Netflix movie directed by Stefon Bristol. The flick follows a “roguish Black American gunslinger” dealing with an ancient evil in East Africa in 1928, and based on that title, one has to assume H.P. Lovecraft’s Cthulhu Mythos plays some sort of part in the story.

Multiple sources are reporting the news about Gordon Hemingway & The Realm of Cthulhu, a new movie that Spike Lee will produce for Netflix. Stefon Bristol is directing from an original script first written by Hank Woon, with additional revisions by both Woon and Fredrica Bailey. The movie is set in East Africa in 1928 and “follows the roguish Black American gunslinger Gordon Hemingway, who teams up with the elite warrior Princess Zenebé of Ethiopia to rescue their kidnapped regent from an ancient evil.”

None of the sources breaking the news about Gordon Hemingway & The Realm of Cthulhu are mentioning this, but Cthulhu comes from the Cthulhu Mythos, created by horror writer H.P. Lovecraft. Lovecraft was (and is) a highly influential figure in the world of horror. He was also extremely racist, so the idea of grafting his mythology onto Black-lead stories is interesting. It’s something that the HBO series Lovecraft Country did recently. All that said, I have no idea how much of Lovecraft’s work will influence this film beyond that title.

Bristol made his directorial debut with another title for Netflix that Lee produced – See You Yesterday, a 2019 movie where “High school best friends and science prodigies C.J. and Sebastian spend every spare minute working on their latest homemade invention: backpacks that enable time travel. But when C.J.’s older brother Calvin dies after an encounter with police officers, the young duo decide to put their unfinished tech to use in a desperate bid to save Calvin.” Here’s a trailer.

Lee will produce Gordon Hemingway & The Realm of Cthulhu with Lloyd Levin and Beatriz Levin. The Wrap adds that the movie “will also have visual effects from the team at Goodbye Kansas. The co-producers on the film are Oliver Oftedal and Tom Olsson for Goodbye Kansas’ production arm Infinite Entertainment.” Goodbye Kansas worked on shows like A Discovery of Witches, Cursed, and Jack Ryan, movies like Wes Anderson’s upcoming The French Dispatch, and video games such as Assassin’s Creed Valhalla, Suicide Squad: Kill the Justice League, and Cyberpunk 2077.