Archives
« NASA says a supermassive black hole is missing! No cause for concern, folks!
‘A.P. Bio’ has been renewed for Season 4! Everyone shut up, shut up, and celebrate! » 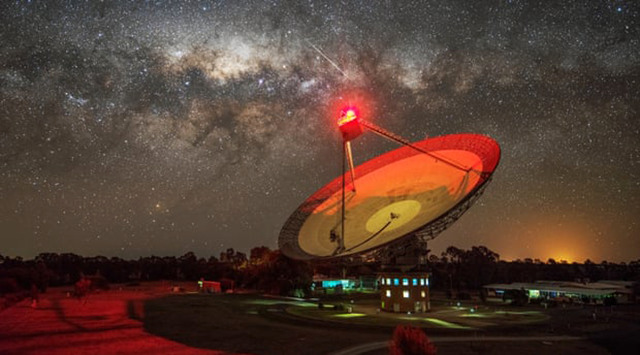 Listen, well know this radio signal coming from our closest star Proxima Centauri ain’t an alien signal. I mean…right? But, like, what if? Either way, this is a sweet fucking development.

Scientists at a prominent SETI group say they’ve identified a signal coming from Proxima Centauri, the closest star to our Sun, that could possibly be from an alien civilization.

The news first broke yesterday in a story by The Guardian. The signal was discovered by Breakthrough Listen, a project founded to listen for signs of extraterrestrial life affiliated with the late physicist Stephen Hawking.

“It is the first serious candidate since the ‘Wow! signal’,” a researcher familiar with the finding, who requested anonymity to discuss the work, told the newspaper. The “Wow! signal,” recorded in 1977, is widely considered to be the most promising finding in the history of SETI — though, like the most recent finding, its implications have been hotly debated.

According to the Guardian‘s sources, the signal was picked up by the Parkes telescope in Australia last year, where it appeared to be originating from the Proxima Centauri system.

It caught the interest of researchers for several reasons. One is that it’s around 980MHz, a band in which there shouldn’t be any human spacecraft transmitting. Another is that its frequency is shifting in a way that scientists say indicates that it could be coming from the surface of an orbiting exoplanet — and Proxima Centauri is known to have an exoplanet in the “habitable zone.” The researchers are now working on a paper about the finding, according to the Guardian.

“The chances against this being an artificial signal from Proxima Centauri seem staggering,” University of Westminster astrobiologist Lewis Dartnell told the Guardian. “We’ve been looking for alien life for so long now and the idea that it could turn out to be on our front doorstep, in the very next star system, is piling improbabilities upon improbabilities.”

Dartnell also told the paper that Proxima Centauri’s most habitable-looking planet doesn’t seem, at first bluff, like a particularly strong candidate for life.

“But I’d love to be proved wrong,” he added.

The Guardian‘s reporting was corroborated later the same day by Scientific American, which locked down better access to the researchers behind the project and reported that they are urging skepticism — but, strikingly, are leaving open the possibility that it could be an alien technosignature.

“The most likely thing is that it’s some human cause,” Pete Worden, the executive director of Breakthrough’s parent organization. “And when I say most likely, it’s like 99.9 [percent].”

Insiders familiar with the finding also clarified to Scientific American that the signal does not appear to contain any information. In other words, it’s basically just a tone — and likely coming from a spacecraft launched from Earth.

Wright also had an intriguing exchange with the Scientific American writer later on in the story, when he was asked about the truism “it’s never aliens.”

“I hate that phrase, because if you say that then why even look,” he told the magazine. “What we mean by that is that it’s never been aliens before.”

That’s the spirit of possibility, of course, that motivates all SETI projects. To wit, the Guardian pointed out that when Breakthrough Listen kicked off, back in 2015, the famed physicist Stephen Hawking made remarks to the same effect.

“Mankind has a deep need to explore, to learn, to know,” he said, according to the paper. “We also happen to be sociable creatures. It is important for us to know if we are alone in the dark.”