Archives
« New PlayStation 5 patent suggests its using liquid metal cooling paste. Whatever the fuck it takes, dudes!
Olivia Wilde is going to be directing ‘Spider-Woman’ movie which is dope ’cause ‘Booksmart’ is fun as hell » 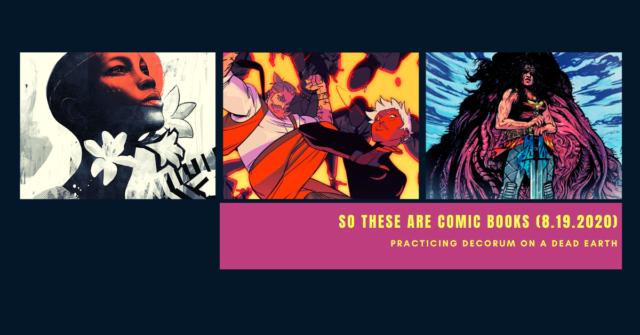 My balls just fucking stank this summer, man. Granted, it’s warm out! And granted, they usually stank after I’ve spent an hour or so working out. But, man! They’re not a good scene. Not a good scene, at all. And it was with those stank-ass balls that I hit up the comic book store today. That’s how committed I am to the cause, my dudes. Oh, I’m two-days late to the cause? The cause of writing a weekly comic books column? Fair enough! However, I’d be even more late if I didn’t pack my perpetually lower dangling testicles into my swampy Honda Civic, and drive my ass to the shop today. So be fucking grateful! Or institute some sort of crystal-powered Smell-O-Vision in this column!

Then you’ll run to the fucking hills! Run for your fucking lives!

With all of that in mind, let’s Dance the Dance! So These Are Comic Books! Hit me up in the comments section with everything I’m fucking missing this week. I know, I know I’m goofing up. Mind you, be kind! Cause I got a set of testicles with your upper-lip in mind, should you act the fucking fool! 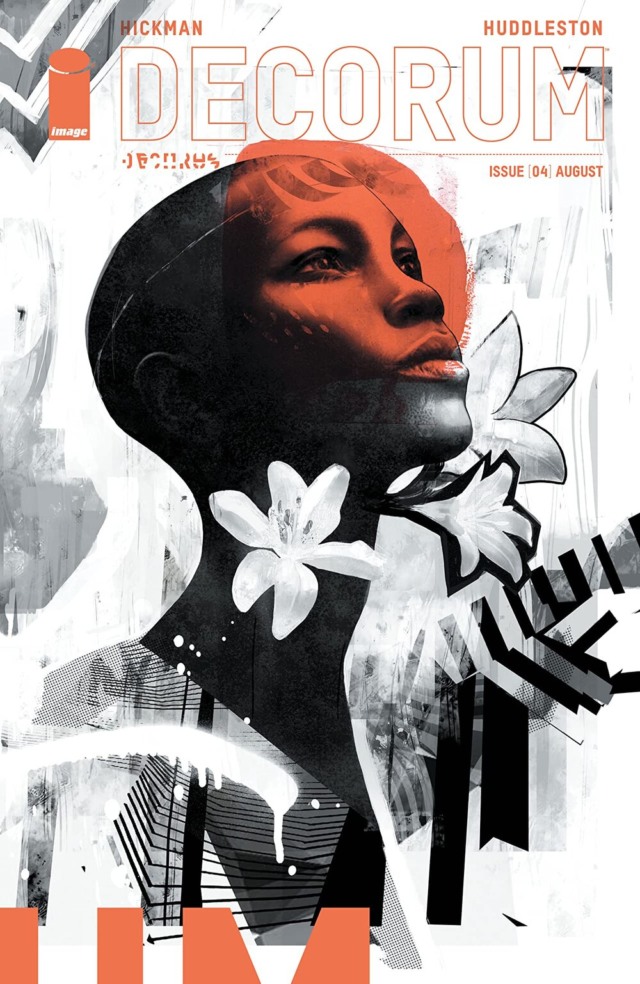 Listen, I’m going to level with you. I keep it honest with the scent of my balls, I might as well keep it honest about the rest of my shit. Decorum is peak fucking Jonathan Hickman. If homeboy works for you, you’re going to love this shit. The motherfucker is a universe-spanning adventure with Artificial Intelligence Gods, bad ass women assassins, and so many fucking charts and pages of prose. I’m three issues in, and I’m still not fucking certain what’s going on. But, I’m more than glad to be along for the ride. This shit is hard, nearly impenetrable hard science-fiction. And for me? That’s absolutely a good thing. However as I said, it’s peak Hickman. If you’re inclined to snore through his big ideas about existence, or roll your eyes at all his charts and graphics, absolutely fucking bail. You’ll be bleeding out of your eyes in no fucking time.

On the other hand, maybe the art alone will win you over. ‘Cause this shit is fucking gorgeous. Mike Huddleston is putting on an absolute fucking clinic, and legit? Imma keep reading this shit for his efforts alone. Hickman’s ponderings of the singularity are welcomed by me, but it’s the artwork that makes this pig special. A special, meaty pig. Ready to be hot dog’d into my skull pipes. Rattling around in there, avoiding my testicles, and finding its final resting place around my existential thinking-gears. 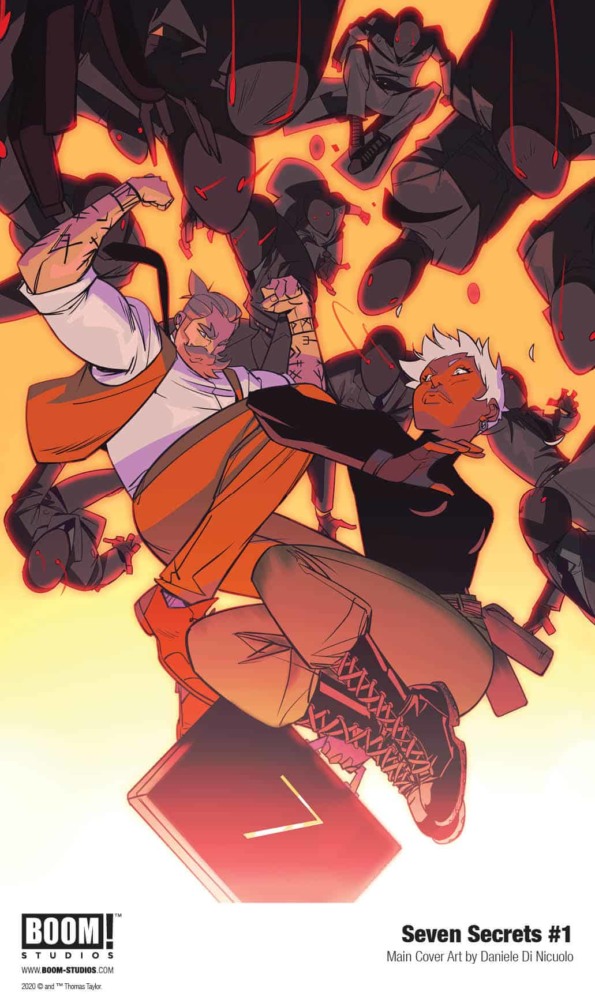 This new title dropped last week, and it was pretty widely praised around the comic book sections of the internet. To the extent where I ended up mentioning it in the comments section of last week’s column. Now, I’m underscoring that shit here in this week’s installment. As an aside, let me tell you that my new comic book store is fucking excellent. Dude, having only known me for like a month, pulled a copy of this motherfucker for me! Sight unseen! Not only is dude thinking of me, but he already knows my taste. Yet, I bombarded him today with the musky, haunting scent of a man’s marinating pubic region. Not fair, man. Not hair.

To keep this shit relegated to actually talking about comic books? This jam has got everything to work my ass-glands. We’ve got a secret society called the Order which protects seven…wait for it, secrets. Them bitches manifest in a variety of ways, from words, to weapons. Shit seems chock full of action, to kick it off too.

Whether it’s fitness supplements, strains of weed, forms of ass play, or comic books, I’m willing to try anything once. This title seems directly up my alley. 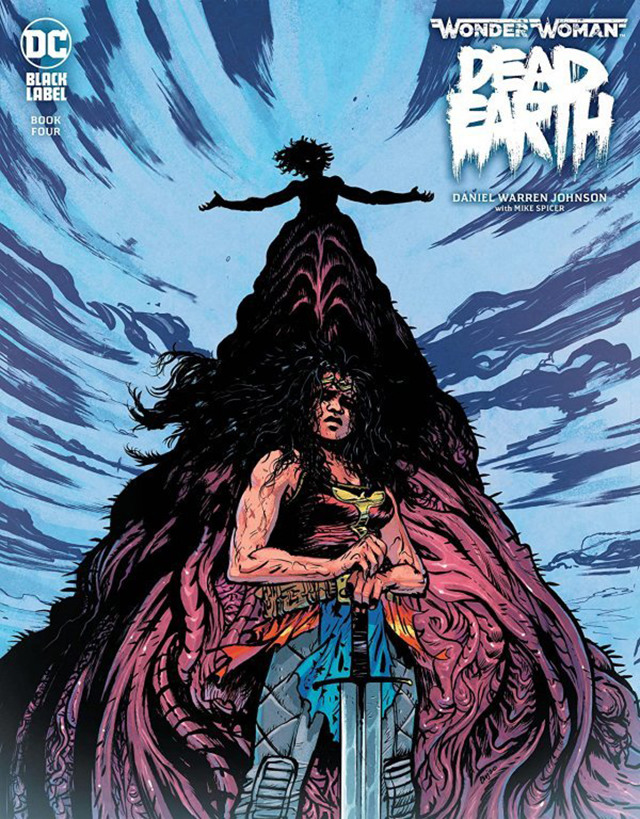 Aiight, this is the fucking title whose previous three issues I simply cannot find. Fucking DC and their new distribution method! This failure to procure the backissues is really fucking grinding my glands, given that this mini-series is from the mind of none other than Daniel Warren Johnson. If you haven’t basked in the glory of DWJ’s artwork, my god. Call yourself a failure and stick yourself in the dumpster behind your local convenience store. Such begins the process of purification. In time, when you’re ready, I’ll come by with sage, and I’ll attempt to purge your ignorant ass.

Seriously though — dude is responsible for Murder Falcon, Extremity (whose two trade paperbacks I recently purchased), and just an absolute fucking murderer’s row of astonishing commissions.

See: his Vader versus Luke Skywalker. Or his Batman. Or his Naito. Or his Akira.

There’s a kinetic nature to his artwork that is perpetually fucking stunning. So, I’m deeply bummed that I haven’t been able to indulge in this series as of yet. I imagine I’ll snag the TPB when it drops, and in the meantime I’ll continue haunting his Twitter, Instagram, and reading Extremity.

That’s it for me, my friends! I’d say I’m about to go scrub the scent of Gloom and Mud off my testicles. But that’d be a fucking lie! Got a yoga class ahead of me, and I imagine the person behind me is going to pass out when I hit my first three-legged dog. It’s outside though, so here’s hoping for a powerful breeze.

None the less! I’m outta here, which means it’s your turn, mafackas! What are you reading this week?