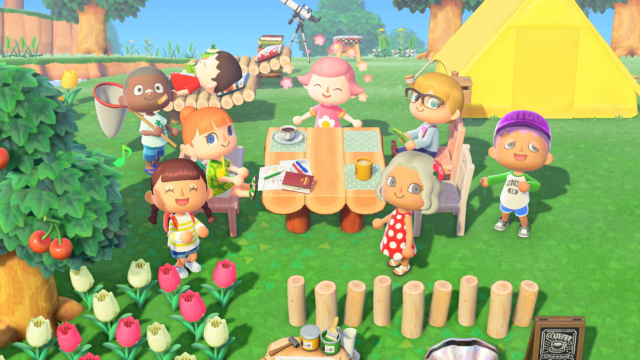 Mamma-fucking-mia, dudes. Nintendo’s profits have increased over 400 percent the past three so or months. Absolutely everybody in the fucking world spending the pandemic in Animal Crossing or some shit.

Nintendo has posted astronomical earnings for the April to June period, increasing its profits by over 400 percent. Why? It has a lot to do with people being stuck at home during the coronavirus pandemic, and a little island-tending empire.

In the company’s financial earnings statement released Thursday, Nintendo reported a 427.7 percent increase in operating profit over the last three months — they made a whopping 144.7 billion yen ($1.37 billion) profit out of 357 billion yen ($3.39 billion) in total revenue.

During the pandemic, Nintendo Switch hardware and software sales have been incredibly strong, with the company selling 5.68 million systems in the quarter (an increase of 166.6 percent). That’s compared to 2.13 million units at this time last year.

As far as software goes, you guessed it, Animal Crossing: New Horizons absolutely smashed it this quarter, selling 10.63 million copies in the past three months, with a high ratio of those sales in Japan, the U.S., and Europe. That brings the total sales to a staggering 22.40 million. And the game seems to have fuelled people’s decision to buy a Switch at all in the last three months.

“Of all systems in the Nintendo Switch family that were played for the first time during this period, over half were used to play Animal Crossing: New Horizons on the first day,” reported Nintendo in its statement.

All of this comes despite Nintendo dealing with supply delays for the Switch due to COVID-19 in March. “COVID-19 created some difficulties in procuring the parts required for the manufacture of Nintendo Switch consoles, but the situation has almost recovered. However, if the impact of COVID-19 expands in the future, it may affect manufacturing,” Nintendo said in its statement. “There is a time lag between production and the stocking of store shelves, and because demand remains strong, there are still shortages in some regions.”

Nintendo also noted the demand for the fitness role-playing game Ring Fit Adventure during the pandemic, which despite being released in Oct. 2019 has been regularly sold out in retailers since March. The game sold 4 million units as of the end of July, though saw a drop in sales due to supply delays on the Ring-Con and Leg Strap accessories.

“Demand for this new proposal from Nintendo of exercising by playing an adventure game was so much higher than our forecasts that the global supply has been unable to keep up since release,” reported Nintendo. The company says it has increased production and shipments of the Ring-Cons and Leg Straps, as well as the Switch, “to ensure a sufficient amount of shipments for the holiday season.”

In terms of the next few months in earnings, Nintendo said its focus for Switch hinges around the recently released Paper Mario: The Origami King and Pikmin 3 Deluxe (due in October), as well as The Crown Tundra, and the second round of add-on content for expansion passes for Pokémon Sword and Pokémon Shield in the fall.

We bet more than a few Nintendo teamsters are throwing parties with Tom Nook and the gang on their islands right about now.