‘Star Wars: The Bad Batch’ is new TV series spinning out of ‘The Clone Wars’ and I imagine people are torqued! 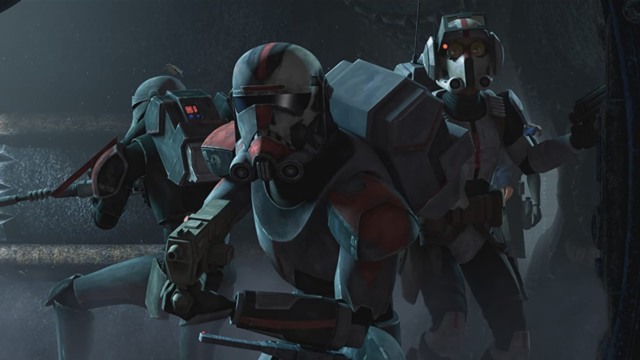 I haven’t watched The Clone Wars. That said, I believe those who say it is good. So I’m pretty sure those same people are stoked about the news of The Bad Batch series on the way. Filoni executive producing, too!

Disney Plus is getting a new animated Star Wars series called Star Wars: The Bad Batch, which is set to debut on the streaming service in 2021. The new show is a spinoff of the recently concluded The Clone Wars animated series, which finished its run on Disney Plus earlier this year.

Like The Clone Wars, Rebels, and the live-action The Mandalorian, The Bad Batch is being executive produced by Dave Filoni, who has become one of the instrumental pieces of Disney’s upcoming Star Wars strategy, especially when it comes to the company’s TV series.

The Bad Batch will focus on the titular squad of clone troopers — of Clone Force 99, aka “the Bad Batch” — who were first introduced in the final season of The Clone Wars (which aired as a Disney Plus exclusive years after its initial cancellation). The Bad Batch is an elite group of soldiers who possess unique skills from standard clones. (For example, one has enhanced eyesight, making him an excellent sniper, while another was physically larger with enhanced strength.)

The new series is set in the “post-Clone War era,” which would place it chronologically in between Clone Wars and Rebels and will focus on the four clones as they “take on daring mercenary missions” and “struggle to stay afloat and find new purpose,” following the fall of the Republic and the rise of the Empire.

“While the Clone Wars may have come to its conclusion, our partnership with the groundbreaking storytellers and artists at Lucasfilm Animation is only beginning. We are thrilled to bring Dave Filoni’s vision to life through the next adventures of the Bad Batch,” commented Agnes Chu, senior vice president of content at Disney Plus, in an announcement of the series.

Star Wars: The Bad Batch is set to debut on Disney Plus in 2021, but it’s by no means the only Star Wars TV series in the works for the streaming service. Season 2 of The Mandalorian is set to debut on Disney Plus this fall, with a third season already said to be in development. There’s also the Diego Luna-led Rogue One focused on Rebel spy Cassian Andor, a highly anticipated Obi-Wan series starring Ewan McGregor, and a “female-centric” series coming from Leslye Headland, co-creator and showrunner for Netflix’s Russian Doll.