Archives
« ‘Horizon: Forbidden West’ is dropping on PS5 in 2021. Fucking next year! Thank the Maker.
‘Cyberpunk 2077’ has been delayed two-months until November. Looks like gonna be played on my fucking PS5! » 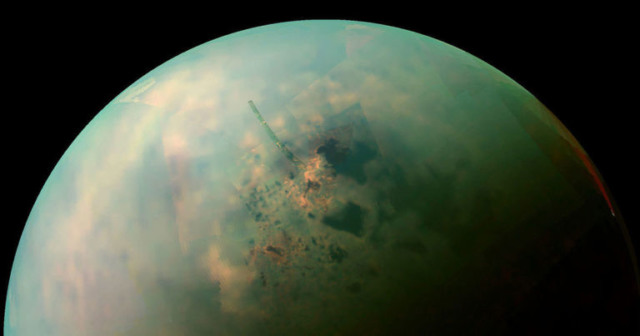 Astronomers have cracked a fucking code, folks. Mystery patches that have puzzled them for more than a decade on Saturn’s moon Titan have been revealed to be “dry lake beds” of hydrocarbon. Pretty fucking rad.

Peculiar flat regions on Saturn’s moon Titan could be the dry floors of ancient lakes and seas. The suggestion, published June 16 in Nature Communications, may solve a 20-year-old mystery.

Starting in 2000, astronomers using radio telescopes on Earth have seen particularly bright radio signals coming from Titan’s equator. Those signals, called specular reflections, occur when electromagnetic waves bounce off of a flat surface at the same angle they went in, like light off a mirror.

The most natural explanation for the reflections was that Titan had large bodies of liquid in its equatorial tropics. When NASA’s Cassini spacecraft arrived at Saturn in 2004, it did in fact show that Titan is speckled with lakes and seas — although the liquid is ethane and methane, rather than water.

“Titan is still currently the only other place in the universe that we know to have liquid on its surface, just like the Earth,” says planetary scientist Jason Hofgartner of NASA’s Jet Propulsion Laboratory in Pasadena, Calif.

But the lakes and seas are concentrated near Titan’s poles, not the tropics. The regions where the specular reflections show up are bafflingly dry.

To solve the riddle, Hofgartner and his colleagues revisited data from the Arecibo Observatory in Puerto Rico, the Green Bank Observatory in West Virginia and the Cassini spacecraft. After correcting discrepancies between the ways the various observations referred to locations on Titan, the team realized that the specular reflections all come from a few specific spots.

The researchers considered whether rainfall, dunes or dry lake beds could be responsible for the reflections, and found that only lake beds explain the timing and locations of the signals. It does rain on Titan, but not frequently enough to explain the reflections, and Titan’s dune fields are in the wrong spots. And the specular reflections come from two specific regions that look like other empty lake basins near Titan’s poles (SN: 4/15/19).

“I think it’s a compelling argument,” says planetary scientist Zibi Turtle of Johns Hopkins University’s Applied Physics Laboratory in Baltimore, who was not involved in the study. “It’s great to have an answer to this outstanding question and one more piece of Titan that we understand better now.”

Turtle is the principal investigator on NASA’s Dragonfly mission, which will land a dronelike spacecraft on Titan in 2034 (SN: 6/27/19). Dragonfly is not going to visit the dry lakes region near the equator, “but there’s always … comparative geology that you can do from one place to another,” she says.

So if the reflections come from lost lakes, where did the liquid go? One possibility is that it moved from the equator to the poles as part of a Titan-wide methane cycle (SN: 12/8/17). Another is that the liquid evaporated and was destroyed by sunlight striking Titan’s atmosphere.

“I wouldn’t be surprised if both were happening,” Hofgartner says.

The finding could sound a note of caution for astronomers looking for exoplanets friendly to life, Hofgartner says. “The lesson is that we have to be very, very strict … when we’re trying to find, say, oceans on other planets,” he says, because evidence of oceans could easily dry up.