‘Spider-Man: Miles Morales’ is a ‘standalone game’ unless it isn’t. Handle your fucking messaging, Sony. Either way it rules. 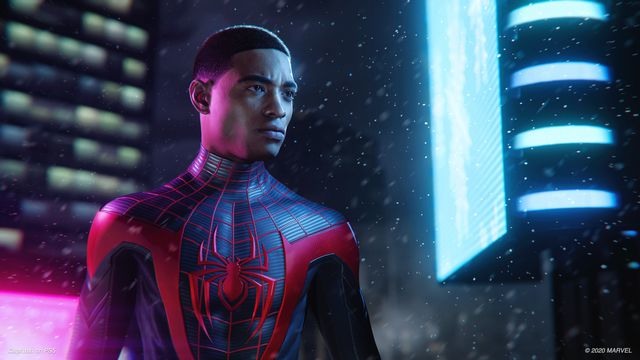 When I saw Spider-Man: Miles Morales revealed, I thought it was a new standalone game. But, then some Sony ding-dong stated that it was an expansion. And THEN!, Insomniac said it was a standalone. Fucking hilarious confusion. Honestly? Sounds like a pseudo-standalone, ala Uncharted: The Lost Legacy. Which fucking owned, by the way.

So, I’m torqued either way.

Spider-Man: Miles Morales is a “standalone game” and “the next adventure in the Marvel’s Spider-Man universe,” developer Insomniac Games said Friday morning, in an attempt to dispel confusion over the nature of the PlayStation 5 title revealed Thursday during Sony’s “Future of Gaming” event.

“We will reveal more,” said Insomniac, “at a future date.”

Insomniac’s statement, which the studio gave on Twitter, directly refuted comments made by a PlayStation executive in an interview with The Telegraph published after the reveal event. Asked for further details, a Sony spokesperson sent Polygon the same statement and did not answer more specific questions.

In addition, Bloomberg reported Friday that Spider-Man: Miles Morales “will be smaller than a traditional console game but will be sold as a stand-alone product,” citing “a person familiar with development.” Bloomberg’s source likened Miles Morales to Uncharted: The Lost Legacy, which began development as an expansion for 2016’s Uncharted 4: A Thief’s End but ended up being released in 2017 as a stand-alone game for $39.99, cheaper than the typical $59.99 price point of a full game.

Concern and confusion had been mounting Friday morning after the aforementioned interview with The Telegraph. “I guess you could call it an expansion and an enhancement to the previous game,” said Simon Rutter, executive vice president and head of European business operations at Sony Interactive Entertainment, referring to 2018’s Spider-Man. The original game starred Peter Parker as Spider-Man, with Miles Morales as a side character.

Rutter implied that Spider-Man itself will be playable on PS5, saying that developer Insomniac Games is working on “major enhancements to the game and the game engine, obviously deploying some of the major PlayStation 5 technology and features.” Sony, which acquired Insomniac last year, has yet to officially announce an upgraded version of Spider-Man for the PS5, although the company used the game as an early PS5 tech demo.

This raises more questions, of course, since Sony has not spoken about plans for a program akin to Microsoft’s Smart Delivery initiative for free Xbox Series X upgrades of Xbox One games. For instance, there’s no word on whether Miles Morales will also be released on PS4. (A banner at the end of the announcement trailer described the game as a “PlayStation Exclusive,” not specifying PS5.)

Leaving aside those questions, though, there’s a larger issue here. The problem is one of transparency, because Sony is the party that created the confusion in the first place, not the comments in the Telegraph interview.

If you skip past the opening announcement of a Grand Theft Auto 5 port, Spider-Man: Miles Morales was the true kickoff to Sony’s “Future of Gaming” event on Thursday, the first time in the hourlong presentation where we saw in-engine footage of an actual PS5 game. Sony had to know that fans would see the trailer and wonder about what Miles Morales actually is: a full game, a spinoff, an expansion? The lack of explicit messaging — which might have come in a traditional onstage E3 press briefing, where a person from Sony or Insomniac would likely have said some words about the project beyond showing the trailer — is what led to the initial confusion.

Either way, Insomniac and Sony have a challenge ahead of them in fulfilling the promise of the Spider-Man: Miles Morales trailer. After it debuted during the virtual event, social media was filled with enthusiasm from people thrilled that a half-black, half-Puerto Rican character was going to get the spotlight in what will likely be a PS5 launch title. (Sony has not confirmed the timing, but the company currently lists both Miles Morales and the PS5 itself with a “holiday 2020” release window.)

Morales was the hero of the Oscar-winning animated film Spider-Man: Into the Spider-Verse, and as a key character in Insomniac’s PS4 game, he’s perfect for a starring role in a follow-up. But gaming also has a long history of relegating characters of color, particularly black characters, to spinoffs and expansions, rather than making them the protagonists of mainline games — for instance, The Lost Legacy focused on Uncharted side characters Chloe (Indian-Australian) and Nadine (black South African). If Bloomberg’s report about the scope of Spider-Man: Miles Morales is accurate, this appears to be a similar situation. And it’s disappointing to hear that this character, which has now a huge fandom partly because of Into the Spider-Verse, may not actually be getting a “full game” of his own.