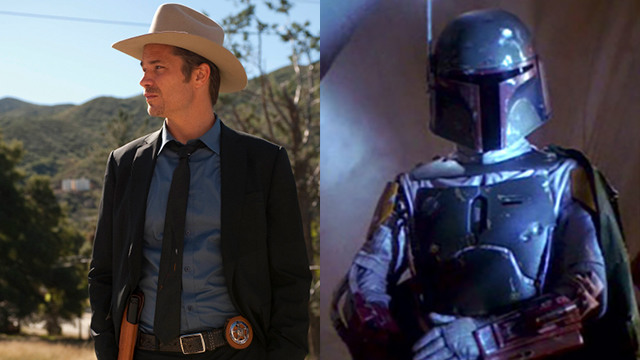 Oh my word, Timothy Olyphant’s role in The Mandalorian Season 2 is even better than expected. Dude is wearing Boba Fett’s armor, and playing a sheriff. The Elder Ones are good.

Last week, it was revealed that Justified and Deadwood star Timothy Olyphant had been cast in The Mandalorian season 2 in an unknown role. Olyphant’s casting is a story we have been chasing and trying to confirm for months now. And while we didn’t get to break the news, we do have some juicy information to add regarding Olyphant’s Mandalorian season 2 role. Which established Star Wars universe character is Timothy Olyphant playing in the upcoming season? And why is he wearing Boba Fett’s iconic armor? Here are the details.

Who is Cobb Vanth?

Our sources have confirmed to us that Olyphant filmed scenes wearing Boba Fett’s Mandalorian armor for the upcoming second season of The Mandalorian. That might sound confusing because earlier this month it was reported that Temuera Morrison, who originated the role of Jango Fett (Boba’s clone father), had been cast as Boba Fett. So what’s going on here?

If Morrison is playing the role of Boba Fett, then Timothy Olyphant is playing an enigmatic character named Cobb Vanth. Introduced in Chuck Wendig’s Aftermath book series, Vanth is the self-appointed sheriff of the Tatooine-based settlement Freetown. He wears a mysterious set of Mandalorian armor that was acquired from Jawas who scavenged the wreckage of Jabba the Hutt’s sail barge shortly after the events of Return of the Jedi. As you may recall, that was the site of a battle where Boba Fett was thrown into the Sarlacc Pit on Tatooine’s Dune Sea. It’s assumed that the Mandalorian armor purchased by Vanth is none other than the infamous green armor formerly worn by one of the galaxy’s most notorious bounty hunters, Boba Fett.

Very little has been revealed about Vanth’s backstory, only that he was once a slave, as evidenced by a star-shaped scar carved into his back, signifying ownership. With the fall of gangster Jabba the Hut, a power vacuum has consumed Tatooine, drawing all sorts of crime syndicates to take over the unruled landscape. Cobb has committed his life in the service of protecting Freetown and keeping criminal elements, like the Red Key Raiders, away from Tatooine. He even struck a deal with the Tusken Raiders to help protect the township.

It should be noted that all of the above character details were revealed during the Aftermath book series. We don’t know what he part he plays in the upcoming season of The Mandalorian, but I think the books offer a rad set-up for the character. The Aftermath series gave the impression that while Boba Fett may be dead, the iconic armor would live on for another generation. But if Fett himself is still alive, and present in The Mandalorian season 2, this complicates things.

Who Was That Mysterious Gunslinger?

In the Mandalorian season one episode titled “The Gunslinger,” a mysterious figure was teased, sporting the bounty hunter’s trademark spurs. In that episode, the Mandalorian agrees to help a young bounty hunter named Toro Calican acquire a target on the desert planet of Tatooine. Their search for the assassin Fennec Shand (Ming-Na Wen) takes them across the Dune Sea, home of the Sarlacc Pit that was thought to have killed Boba Fett. Calican takes out Shand and tries to double-cross the Mandalorian, leading to his own death. In the final moments of the episode, we see a mysterious character approaching the seemingly lifeless body of Fennec Shand. We can see and hear the bounty hunter’s trademark spurs and a cape hangs down, reminiscent of the one Fett may have worn. Is that character Boba Fett, or is it Cobb Vanth?

Was Fett’s Mandalorian armor reclaimed by the Jawas after the Sarlacc spit them out, or did Boba Fett pawn them for a ride off this dirty sand planet? Morrison’s casting led many to assume this meant that Boba Fett survived the fall into the Great Pit of Carkoon, forever changing Star Wars canon. But that might not be the case at all. Maybe Fett’s appearance could be limited to an establishing flashback. The hardworking team at The Hollywood Reporter even noted that it was only a “small role” in season two. But why would Vanth be all the way out in the Dune Sea? Perhaps this season may be leading to a confrontation between Vanth and Fett, with the bounty hunter coming back to reclaim his armor? And how will any of this involve The Mandalorian? We’ll have to tune in to find out.

We reached out to Lucasfilm for comment but received no response back, as was typical with our previous Mandalorian scoops. The Mandalorian season 2 is still scheduled to be released in October 2020 on Disney+.