Archives
« First Look: Timothée Chalamet as Atreides from the upcoming ‘Dune’ adaptation. I fuck with it, but I also don’t know ‘Dune’
‘Dune’ First Look: Come to check out the cast in their stillsuits, stay for bearded Oscar Isaac » 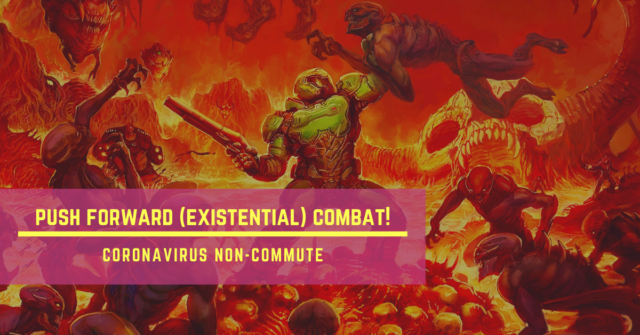 I’ve noticed as I get older, I’m more comfortable distilling my personal credos into easily digestible phrases. There’s a tendency to revere a certain opacity when it comes to philosophizing, but all of that balderdash can smeared across someone else’s shit sandwich. Instead, I prefer my touchstones to be accessible and to the point.

Be excellent to each other.

One must picture Sisyphus happy.

Goddamn it, you’ve got to be kind.

And, maybe it’s because I’ve been playing DOOM ETERNAL, but one phrase has kept sounding in my brain-meat during this current pandemic.

It’s the lodestar for the franchise, but really, it’s the lodestar for my life these days. Just keep pushing forward during all this. Don’t dawdle, staring your demons in the eyes as they slowly chip away at your health. Continue moving, continue ripping, continue tearing, and eradicate them motherfuckin’ demons as you continuously put one step in front of the other.

Yeah, it’s silly, but it’s really how I’ve come to view our current adventure. Shit is almost incomprehensible in its scope, in how long we’ve been at it, and how long we may have to be enduring it.

For instance: I know at the very least I ain’t going to be clapping shoe tread to campus pavement for another five months.

And when that realization washes over me, I gotta be honest, I ain’t gonna stunt – it sort of takes my breath away. But, we all gotta just take this shit one step at a time. Push forward. One moment, day, week, month at a time. It’s a simplistic stance, but there ain’t no use in giving in. Slowing down. Letting the demons get ya.

I’ve been watching an incredible amount of movies as of late, my friends. They’re my go-to distraction from my own nervous diarrhea, existential dread, and economic uncertainty. Out of all the jams I have in fact jammed out to lately, I have to say last weekend’s viewing of The Hills Have Eyes has been my favorite. Sure, it seems as though Craven saw Chainsaw Massacre and wanted to make his own rendition, but who the fuck cares. It’s a haunting ass rebuke of the nuclear family, perhaps literally, and it also involves people wanting to eat babies. I’m in.

Breakin’, The Interview With The Vampire, The Suspect, and The Ritual.

So, I fucking cracked, friends. Shattered. Not only have I spent the last few hours playing the Final Fantasy VII Remake, but I’m also loving the fuck out of it. But wait, fuckers! There is more. I was so desperate to play the title after Bateman’s effusive praise that I canceled my physical copy coming in lieu of a digital copy.

And, I regret fucking nothing.

I’m about to hang a lot of synthwave on you, once again! But, I’d also like to drop a new Aesop Rock track on your tits for you to play with. The jam is “KWOP” and it’s actually from an indie game. Bro did the soundtrack and all. A little esoteric, mind-warping hip-hop for your unprepared asses.

[Also listened to in the last few days]

Bateman and I sought out a couple of classic matches this past weekend. And what I mean by “sought out” is that I typed “Best Jushin Thunder Liger” and “Best Shibata” matches into the Google-Machine and went from there. That said? Shinjiro Otani vs. Jushin Thunder Liger from 1997 was as billed. Which is to say one of the greatest Super Junior matches ever. And, Shibata versus Ibushi from G1 Climax in 2015 delivered in all the ways a proper climax does.

I don’t know, friends! That’s really it. Surviving. One day at a time. Really enjoying hanging out with you pricks here, and on the streams twice a week. Hope you’re healthy. Hope you’re (relatively) sane. Tell me, what are you enjoying this week?