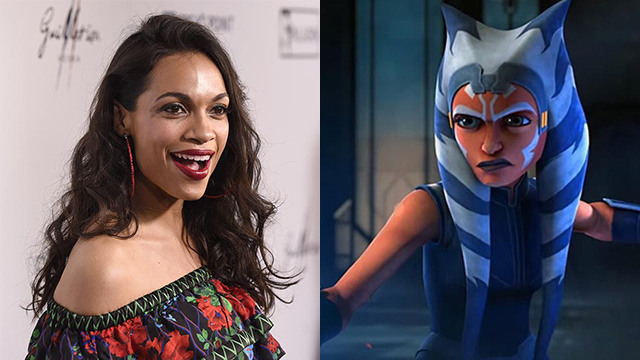 Man, I’m really hoping we can pull through this pandemic. Selfishly, just for pop culture reasons. I mean, Rosario Dawson playing Ahsoka Tano in The Mandalorian Season 2? Fuck to the yes. As well, I know it feels sort of silly to get excited about pop culture news these days. But, it may be the necessary distraction, and the light at the end of the tunnel to keep us all sane.

If rumors are true, Rosario Dawson will play the live-action Ahsoka Tano in The Mandalorian season 2.

Ahsoka Tano was first introduced to the Star Wars universe in The Clone Wars animated series, where she was a young Jedi, and the apprentice of Anakin Skywalker. She played an important role in The Clone Wars all the way up to the final season. Tano then appeared again in Rebels. If she does appear in The Mandalorian season 2, as Slashfilm reports, it would be the first time she’s appeared in live-action — even if she does have a small cameo in The Rise of Skywalker.

Tano appearing in The Mandalorian would mean that the character would be brought to live-action by one of her original creators. The Twi’lek Jedi was originally co-created by The Clone Wars supervising director Dave Filoni, who also serves as a writer, producer, and director on The Mandalorian.

Polygon has reached out to Lucasfilm and Rosario Dawson’s representatives for comment. Disney previously announced that The Mandalorian season 2 would arrive to Disney Plus in October 2020.