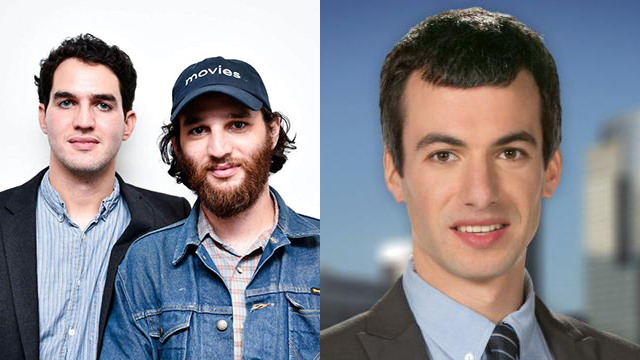 The Safdie Brothers’ Uncut Gems still rattles around my brain on the regular. And, Nathan For You is one of my favorite shows of all time. So, this combination is fucking glorious. Glorious!

Showtime has given a pilot green light to The Curse, a half-hour comedy from Uncut Gems directors/co-writers Benny & Josh Safdie and Nathan for You creator and star Nathan Fielder, I have learned.

Written by Fielder and Benny Safdie, The Curse stars Fielder and co-stars Benny Safdie. It explores how an alleged curse disturbs the relationship of a newly married couple who star in Flipanthropy, their troubled HGTV show, I hear.

The Curse does not cite any real-life inspirations, though its description does bring to mind Tarek El Moussa and Christina Anstead, stars of HGTV’s popular series Flip or Flop, whose marriage fell apart after the success of their show made them household names.

Fielder, Benny Safdie and Josh Safdie executive produce the pilot, which is produced by Showtime. I hear the project had been pitched with the Safdie brothers directing but the duo will not direct the pilot. The network declined comment.

For their work on the Adam Sandler starrer Uncut Gems, the Safdies won this year’s Film Independent Spirit Award for Best Director and were nominated for Best Screenplay. They previously were nominated in the director category for Good Time, in which Benny also starred, and won the John Cassavetes Award in 2011 for Go Get Some Rosemary.

Fielder shared in Emmy and DGA Award nominations for his directing work on Who Is America?, the Sacha Baron Cohen series on Showtime. Fielder’s Comedy Central show Nathan for You was nominated three times for WGA Award in the Comedy/Variety Sketch Series category, winning in 2019. His other writing credits include Jon Benjamin Has a Van and Important Things with Demetri Martin. Acting credits include The Disaster Artist, Transparent and Drunk History.

At Showtime, The Curse joins fellow comedy pilots Big Deal, starring Vanessa Bayer, and How To Make Love to a Black Woman (Who May Be Working Through Some Sh*t)