‘The Batman’ has finally begun production! No, I’m fucking serious! Check out this photo from set. 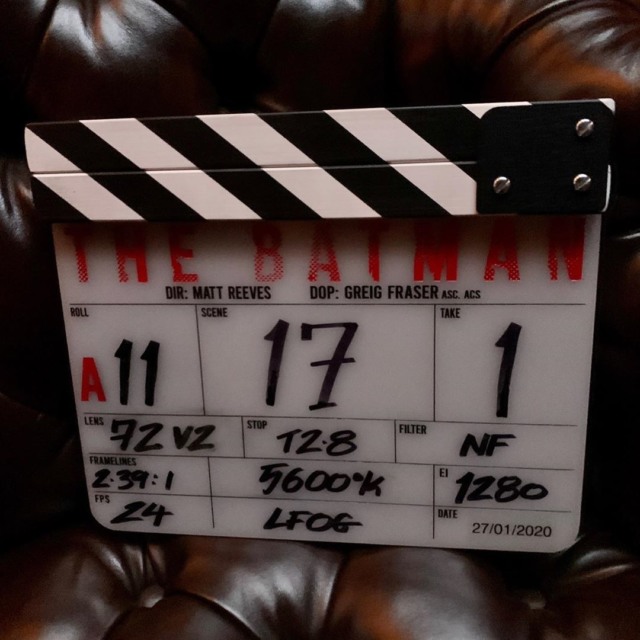 Holy shit, the long, long, long-ass gestating The Batman has finally begun production. Director Matt Reeves commemorated it with an official photo. What a time!

UPDATE: Warner Bros. has announced character details for Peter Sarsgaard and Jayme Lawson. You can find them within our original story below.

On the evening of January 27, 2020, director Matt Reeves announced the start of production on The Batman with the slate for the first day of shooting. That means we’re just a year and a half away from seeing the return of The Dark Knight on the big screen.

This announcement comes after several set photos had already emerged out of London, presumably with a second unit starting their work early. That makes this the official start of principal photography. That means we might finally start seeing photos from the set with Robert Pattinson as Bruce Wayne/Batman.

As for the rest of the Batman cast, Colin Farrell was recently confirmed to play The Penguin, Zoe Kravitz is the thieving Catwoman, and Jeffrey Wright is Commissioner Gordon.

Peter Sarsgaard is also part of the cast, but his role has yet to be disclosed. However, a certain photo posted to Instagram by Maggie Gyllenhaal awhile back had some guessing that he might be playing Harvey Dent or Hugo Strange. Either way, he compared the vibe on set to a Pixies concert from his college years.

UPDATE: An official press release from Warner Bros. Pictures has revealed that Peter Sarsgaard is actually playing Gotham District Attorney Gil Colson, a character not found in DC Comics. Meanwhile, newcomer Jayme Lawson will be playing Bella Reál, a Gotham City mayoral candidate. Anyone want to take bets on Gil Colson getting killed in this movie and then replaced at the end with a surprise cameo by someone playing Harvey Dent?

In addition to shooting in London, it was confirmed that some Batmobile sequences will be shot in Glasgow, Scotland. That might mean we’ll be getting a Gotham City that looks a little more gothic again instead of the modern metropolis vibe we’ve gotten from both Christopher Nolan’s Dark Knight trilogy and Zack Snyder’s DC Extended Universe.