Monday Morning Commute: In the Glow of the Great Uniter: Baby Yoda 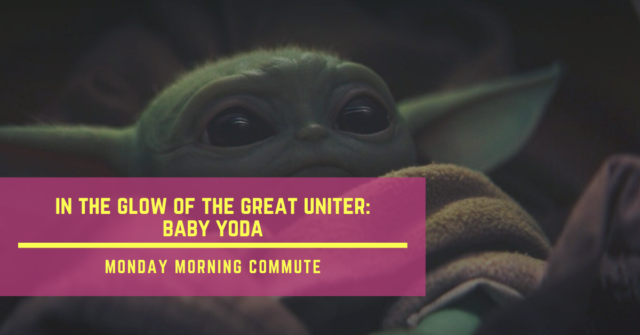 Man, it’s Baby Yoda’s world! We just living in it. The little green fucker has taken over our pop culture zeitgeist and for good reason: they’re equal parts adorable and fantastic. How the fuck you doing, friends? Hope you’re hanging in there. I’m in the dregs of the semester, pulling myself through the shit-flecked glass shards that is the last few weeks of the Fall.

But! It ain’t all hopeless. I got a lot of things to look forward to this week. And next! And, Baby Yoda is at the center of my glowing existential heartbeat. Every moment between now and Friday is just time to burn until the next episode of The Mandalorian.

Anyways, this is Monday Morning Commute! I hope you’ll join me in listing what you’re enjoying this week. What you’re looking forward to enjoying. And, anything and everything on your pop culture mind.

Well, fuck my ass! Jon Favreau has issued forth the dopest shit in Star Wars since Return of the Jedi. Fuck, maybe Empire. And at the same time, Star Wars Jedi: Fallen Order looks rad as fuck. What a time to be a fan. What a time!

Oh lord, next week is Thanksgiving! And the motherfucker ain’t arriving a moment too early. I need it. My students need it. I’m so desperate for it, I’m happy to trade my Mother-In-Law coming for a few days in exchange for a a mini-vacation.

The writing in Borderlands 3 is so fucking bad it makes me physically angry. Playing through this game is a 60/40 split between awful, awful edgelord writing, and fun gameplay. It’s a shame really, my dudes. The gameplay, the guns, and the locations are so fucking rad. But, they’re constantly undermined by dick-pain inducing bad writing.

Meanwhile? The Outer Worlds continues to be everything Bethesda has failed to deliver in their Fallout titles. It’s fucking magical, dudes. Great setting. Difficult choices. Some zippier-than-expected gameplay.

Okay, so I’m technically not watching Watchmen. I’ve only seen the first two episodes. Blame my wife! I pledged to watch it with her, and she’s been traveling on business, and at teacher training for yoga. But what I’ve seen! Has tickled me.

However, Sam and I did watch the S4 premiere of Rick and Morty. Wasn’t exactly revelatory, but I’m never going to turn my nose up at more R&M.

I’m almost positive Bateman and I are done with DKC2. Like, as Eduardo has pointed out, we’re just sort of fucking flat-out miserable playing it. Why suffer! When there’s The Messenger DLC! And Dead Cells DLC! And myraid other indie platformers out there for us to rock.

That’s it for me, friends! What are you digging this week?!