Archives
« Domino’s Japan has a “Halloween Roulette” pizza with ghost pepper sauce in one random slice. Chaos, fucking chaos, I love it.
‘The Last of Us Part II’ delayed until May 2020. Sucks, but delay is better than compromised quality. »

Conan O’Brien is in ‘Death Stranding’ as Kojima continues to dare us to call him on his bullshit, my god 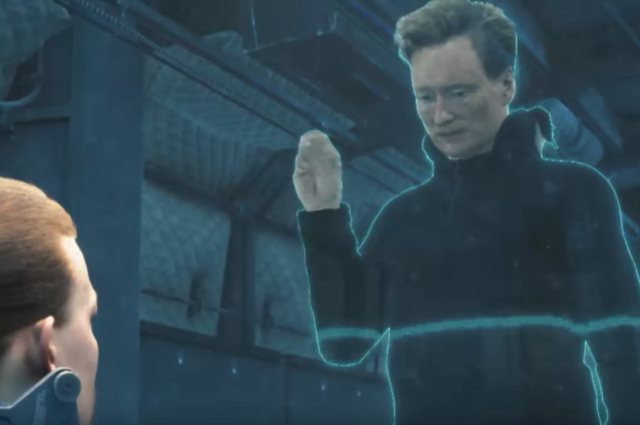 Conan O’Brien is in Death Stranding. A game, which seems like it features many ridiculous and cool things. But, is a cool game? I’m skeptical as fuck.

Conan O’Brien makes yet another celebrity cameo for Death Stranding, and it’s about as bizarre as you might expect. Then again, considering it’s Death Stranding, can anything truly be called “bizarre” in the first place?

Hideo Kojima teased the inclusion of his good friend early this morning. A holographic O’Brien deadpanning a few ironies is only the beginning. He’s wearing a plushie otter on his head. That’s a gift for the player character, Sam; with it, Sam can float down a river otter-style, giving is the delight of seeing Norman Reedus, rolling, scratching his belly and wiggling like an otter.

Conan O’Brien appears as a prepper “The Wondering MC” in DS. You get “Sea Otter Suit” when you get connected with him. With this suit, you’ll be able to swim easily in the river, you won’t be drifted away! BB would be happy as well. 👍🌈🦀☔️🐟🐋🐬💀👶✋🤩😍 pic.twitter.com/nIsw5JS5t0

But hey, at least there’s a utility for this suit; it’s not just a pure cosmetic. So be sure to keep Conan and this aqua-tanooki suit in mind when planning the water travel portion of your open-world adventures.