Astronauts have bioprinted beef in space for the first time. Look at that headline! Fucking wild. 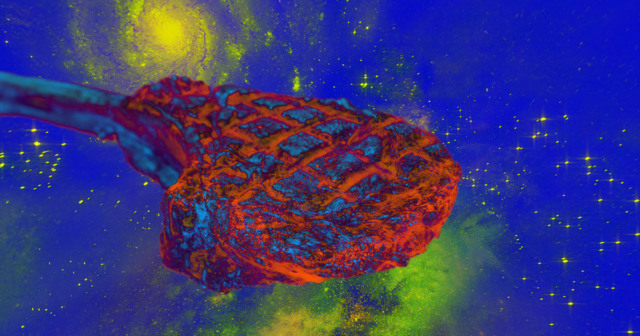 Space Meat
In 2018, Israeli-based food tech startup Aleph Farms made a breakthrough in the alt-meat industry by creating the world’s first lab-grown steak, a hunk of cell-cultured meat that mimicked the texture and structure of the beef you’d find at the supermarket.

The company hopes to one day provide access to nutritious slaughter-free meat to everyone on Earth — and maybe everyone in space, too, as astronauts have now used Aleph’s process to successfully grow meat on the International Space Station.

Beefy Science
This first-of-its-kind experiment took place in the Russian segment of the International Space Station on September 26, according to an Aleph press release published Monday.

The astronauts used a 3D bioprinter developed by Russian company 3D Bioprinting Solutions to coax bovine cells shipped from Earth into forming muscle tissue. In other words, they “grew” a tiny piece of beef in microgravity.

Meat For All
The proof-of-concept experiment not only illuminates a path to providing astronauts aboard the ISS — or even further out in space — with fresh meat, but it also demonstrates the ability of Aleph’s process to work under extremely hostile conditions.

“We are proving that cultivated meat can be produced anytime, anywhere, in any condition,” Aleph CEO Didier Toubia told The Guardian. “We can potentially provide a powerful solution to produce the food closer to the population needing it, at the exact and right time it is needed.”