Archives
« ‘The Last of Us 2’ Trailer: Ellie’s revenge quest arrives February 21, 2020!
John Krasinski announces ‘The Quiet Place 2’ has wrapped filming but who cares the first was a middling yawn »

Marvel’s Kevin Feige is working on a ‘Star Wars’ movie and I am positively stoked, dudes 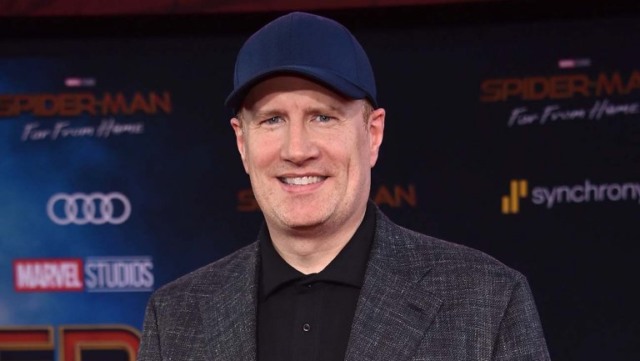 I postulated, a way back, that the way to get angry nerds back into the Star Wars fold was to bring in the Russo brothers. Well? Kevin Feige ain’t the Russo Brothers, but he is the architect of the Marvel Cinematic Universe. Dude shits, at worst, enjoyably forgettable movies. So, this is extremely good news to me, my friends.

Spider-who? Weeks after Marvel Studios president Kevin Feige lost the ability to put Spider-Man in his movies, he’s going to start working in a galaxy far, far, away.

The Hollywood Reporter reveals that Feige, the architect of the Marvel Cinematic Univers, “is going to be developing a Star Wars movie.” And that’s it. There’s no word if it’s the David Benioff and DB Weiss movies, Rian Johnson movies, something else entirely, we just know Feige will is going to work on Star Wars.

“We are excited about the projects Kathy and the Lucasfilm team are working on, not only in terms of Star Wars but also Indiana Jones and reaching into other parts of the company including Children of Blood and Bone with Emma Watts and Fox,” Disney Walt Disney Studios co-chairman and chief creative officer Alan Horn said in a statement. “With the close of the Skywalker Saga, Kathy is pursuing a new era in Star Wars storytelling, and knowing what a die-hard fan Kevin is, it made sense for these two extraordinary producers to work on a Star Wars film together.”

Feige has long been a huge Star Wars fan, to the point where, back in 2016, I flat out asked him if he’d ever be interested in making Star Wars movies. At the time Feige claimed he preferred being a fan and seeing the movies rather than making them. (The below is a quote from an Interview I conducted around Captain America: Civil War but never ran. Now, it’s newsworthy.)

I have two jobs: Running Marvel, being a big Marvel fan, and being a Star Wars nerd. Those are my two jobs. My house is full of Star Wars so I’m as big a Star Wars fan as there is. What’s great is, I’ve often said if I wasn’t making these Marvel movies I’d be waiting in line to see them but, and this must happen to you too, you’re behind the scenes, you see things, and you’re losing the purity of the experience of being a film fan. I’ve not lost that at all with Star Wars and I don’t want to lose that. I saw The Force Awakens at the premiere but I probably knew less than you about the movie. … The closest I have is sometimes, we were doing Doctor Strange in the vicinity where there were some Star Wars things starting to happen and sometimes I’d try to peek around a corner and see a piece of plywood being turned into a ship of some kind and geek out. So I like being the Star Wars fan that I am.

Well, that Star Wars fan is now going to be working on a movie.