Archives
« ‘Lucy in the Sky’ Trailer: Portman and Hawley get trippy in their trip to space and back
‘Mario Kart Tour’ is dropping on smartphones on September 25. Get pissed at blue shells anywhere, now! » 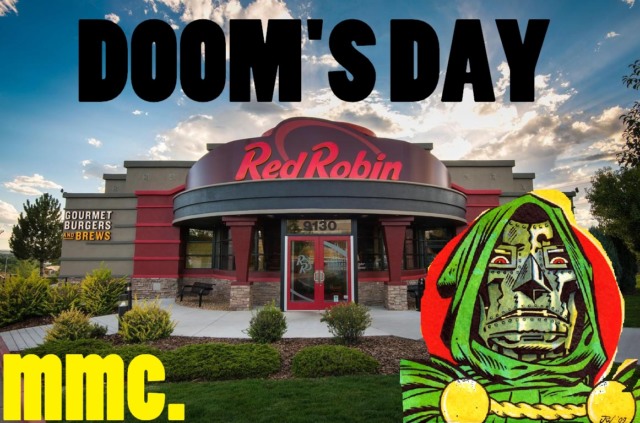 I met Kevin Feige once.

It was at a Red Robin, y’know the restaurant with the greasy burgers and tight-lipped waitstaff who don’t care if y’bring a little bourbon to sneak into your milkshake as long as y’don’t tell the manager when y’catch `em bumpin’ lines in the bathroom?

Anyways, I was drooling onto my Cajun-fries and preparing to send my boyfriend a breakup text for the fifth time that month — yeah, we were havin’ some serious problems — when I looked up to see the baseball-hat-wearin’-Marvel-Man himself. He was in a booth, a big booth, y’know, with a woman too sexy to be his wife but too classy to be an escort.

I saw this as my chance, so I bolted from my booth, jus’ a little tiny one, y’know, and I practically hopped over the bottle-blonde and sat nearly on Kevin’s lap. I asked if he’d like to hear my pitch for an MCU movie and when he said “No,” well, I knew he was playin’ hard to get. So anyways I launched into my pitch which saw Ben Grimm and Reed Richards livin’ in a post-apocalyptic vision of the Future Foundation’s ruins and they just go about their day doin’ normal apocalypse stuff like foraging for canned goods and stayin’ out of the sun, but without doin’ any superheroic shit. Sue’s dead and Johnny’s dead and eventually we find out that Franklin’s hooked on smack, so some of the movie, maybe even a half-hour, is just Reed cradling his dopesick son while Ben weeps in the corner.

Anyways, I got to meet Kevin Feige and I thought I heard him say that he’d visit me in jail but the officer dragging me away was real rude, y’know, and wouldn’t let me go back into the Red Robin to double-check.

So, I don’t know, maybe’s it’s gonna be launched with Phase 5, but I’m really excited for Doom’s Day.

I’d apologize for that, but something tells me you either aren’t offended by my nonsense or you never even check it out.

So what’re we doing now, you ask? Well, we’re diving into the Monday Morning Commute, even though it’s the afternoon!

I’ll show off some of the stuff I’m diggin’ into this week, and you hit up the comments section to do the same! It’s pop culture cross-pollination at its finest!

I’m currently elbow-deep in work for the start of school next week. However, I’m trying to do all the prep work I can this week so that the weekend can consist of grilling and consuming CHEESEBURGERS FOREVER!

That’s right — one of my week’s highlights will be daydreaming about cheeseburgers.

Yes, of course I’m going to continue WONDERING ABOUT STAR WARS IX! This little look doesn’t give much, and of course anything it gives is devoid of context, but it’s enough for me to nerd out.

I’ll definitely be taking a break to sit down and watch STICKS AND STONES, the latest (and I think last-per-this-deal) Netflix special from DAVE CHAPPELLE.

Definitely recommending “THE SIGNAL FIRE” to all of my comrades with a soft spot for KILLSWITCH ENGAGE. I haven’t checked the rest of the album out, but this is promising.

I’m sort of interested in the new TOOL album, which drops later this week. I’ve never been a diehard fan of the band, but they’ve always done interesting stuff.

Tryin’ out a band called ALL THEM WITCHES. They popped up in my feed and seem pretty solid, so they get a few spins, for sure!

So there we have it — some comedy, food-dreams, and tons of music. This is pretty much par for course during heavy workweeks.

What’re all y’all up to these days?!