Archives
« ‘Mindhunter’ Season 2 is officially dropping August 16 which I thought we already knew but I guess not or some shit
John Carpenter is writing a Joker one-shot for DC’s Year of the Villain. I am horrifyingly excited. Get it? Terrible pun! » 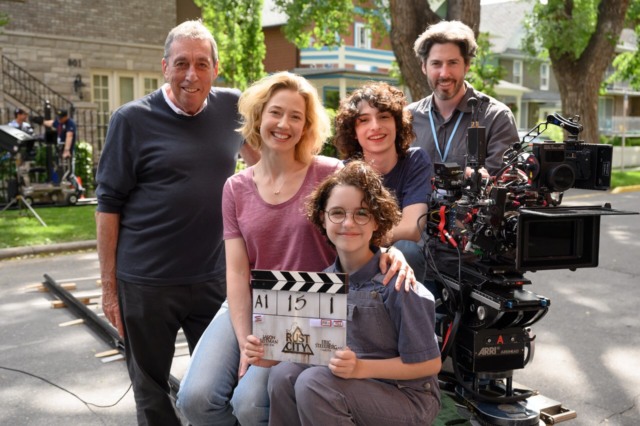 I am unabashedly excited for Ghostbusters 2020. Maybe I should be, maybe I shouldn’t. But, that’s what I am. None the less, here’s an official behind-the-scenes look at the cast.

Before the weekend, Ghostbusters 2020 director Jason Reitman teased the return of the Ecto-1 with a photo showing that the paranormal investigation wagon probably needed a little love to get it back into shape. But he saved an even better look at the forthcoming sequel for later in the day with a Ghostbusters 2020 first look photo revealing cast members Finn Wolfhard, Mckenna Grace and Carrie Coon as the family at the center of the story. Check it out below.

Mckenna Grace looks like she’ll make quite the new Ghostbusters, which is good since Reitman’s entire inspiration for this movie came when he envisioned a 12-year old girl sporting a proton pack. Grace has a look that feels reminiscent of Egon Spengler in the original Ghostbusters. Is there any chance that this family turns out to be connected to Harold Ramis’ character? Perhaps he had an estranged daughter who never knew him.

As you can see in the photo posted to Twitter, the film’s working title is Rust City. That title was used to develop the project in secret, but if you zoom into that photo, you’ll notice that the trademark ghost logo from the original Ghostbusters is peaking out from behind that triangle in the title on the slate.

The slate also reveals that Eric Steelberg is acting as director of photography on the movie. He’s worked with Jason Reitman on nearly every single one of his movies, from Juno in 2007 to last year’s Tully. The only movie that Steelberg didn’t shoot for Reitman was his directorial debut Thank You for Smoking.

Aside from the main characters at the center of Ghostbusters 2020, this photo is also a family affair because original Ghostbusters director Ivan Reitman is there on set with his son. The senior Reitman is only producing this time, but he’s been preparing the young Reitman for this job his whole life. In case you missed it, Jason Reitman gave quite a touching tribute to his father when the two of them showed never-before-seen production footage to attendees of Ghostbusters Fan Fest.

So it’s safe to say that production is underway, and since Reitman’s photo of the Ecto-1 from earlier in the day indicated that he’s up in Calgary, Alberta in Canada, that’s likely where this neighborhood shot comes from. Maybe we’ll get some spy photos from the set to reveal even more from the movie. Then again, maybe Jason Reitman will keep updating us with photos from the set, especially when the sequel’s legacy cast members start showing up. Stay tuned for more.