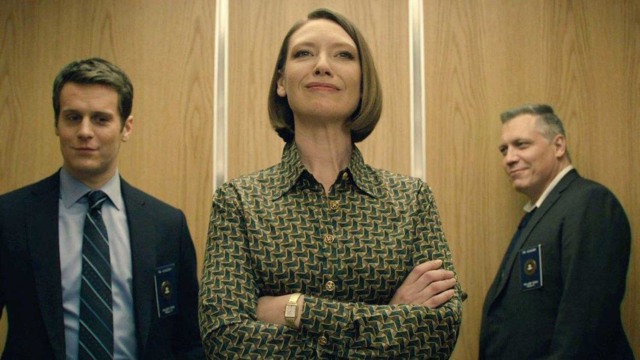 Somehow, I thought we already knew the official date for Mindhunter season 2. But, I guess not! Prepare yourselves though, it drops in little over a month. August 16.

We have a date, fellow investigators of the serial killer psyche.

Jonathan Groff, Anna Torv, and Holt McCallany will be back on Netflix when Mindhunter season 2 premieres this Aug. 16. That’s according to executive producer and series director David Fincher, who let the news slip on a recent podcast appearance. A rep for Netflix later confirmed the premiere date to EW.

This aligns with what Charlize Theron, another executive producer on Mindhunter, previously stated on The Howard Stern Show that season 2 would drop during August. Now it’s official.

Joe Penhall (The Road) created the series, which immortalized actor Cameron Britton‘s relationship with egg salad sandwiches through his raved-about performance as killer Ed Kemper. Penhall has since left the project, according to McCallany in a previous interview with EW.

“David took control over the arc of the story, everything has changed considerably from the original scripts that were turned by a talented British writer named Joe Penhall but who is no longer with the project,” the actor said.

Mindhunter follows a special team within the FBI, spearheaded by Agent Holden Ford (Groff), that investigates what makes serial killers tick during the ’70s. The show was formally renewed for a second season in November 2017 after season 1 premiered in October of that year. To say bingers have been patient is the understatement of the modern age.

“Next year we’re looking at the Atlanta child murders, so we’ll have a lot more African-American music which will be nice,” Fincher once told Billboard of season 2. “The music will evolve. It’s intended to support what’s happening with the show and for the show to evolve radically between seasons.”