Archives
« Hubble has found a supermassive black hole that shouldn’t exist. The Cosmos is humbling, dudes
Christoph Waltz returning as Blofeld in ‘Bond 25’ and here’s hoping it doesn’t blow..feld? »

Vaughan and Chiang’s ‘Paper Girls’ adaptation gets full-series order from ‘Amazon Studios’ which is neat but where that ‘Saga’ adaptation? 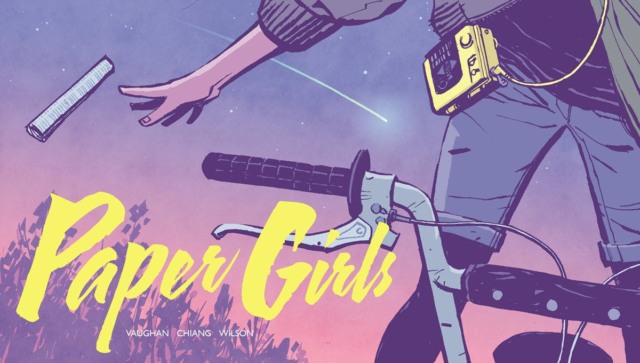 Gonna level with you: don’t really care for Paper Girls. I’m a good bit burnt out with 80s nostalgia peddling. That said, I’m glad that Vaughan and Chiang’s product is getting adapted. Always a feel-good for the creators involved. And, who knows? Maybe the show resonates with me more than the comic does.

Toy Story 4 co-writer Stephany Folsom will pen the adaptation of the graphic novel, created by Vaughan and co-created by Cliff Chiang. She will executive produce with Vaughan and Plan B.

Paper Girls marks the first project under Vaughan’s multi-year overall deal with Legendary Entertainment. It also expands Folsom’s relationship with Amazon Studios where she currently serves as a Consulting Producer on the anticipated The Lord of the Rings series.

The series follows four young girls who, while out delivering papers on the morning after Halloween in 1988, become unwittingly caught in a conflict between warring factions of time-travelers, sending them on an adventure through time that will save the world. As they travel between our present, the past, and the future — they encounter future versions of themselves and now must choose to embrace or reject their fate. An emotional adventure in which the girls and the women they eventually become are tough, their friendships are authentic, and their journey through time is epic.

Vaughan is a bestselling writer and co-creator of several acclaimed, award-winning comics and graphic novels, including the Hugo Award-winning Saga, with artist Fiona Staples, as well as Ex Machina, with artist Tony Harris, Barrier, with artist Marcos Martin, and We Stand on Guard with artist Steve Skroce.

In TV, Vaughan serves as an executive producer of the adaptation of FX drama series Y: The Last Man starring Diane Lane, and as an executive consultant of Hulu’s Runaways, currently in its second season, which also is based on a comic by him. Vaughan is repped by Verve and Ziffren Brittenham.

Folsom most recently wrote the screenplay for Pixar’s newly released Toy Story 4. She is repped by Verve, Kaplan/Perrone and Gregg Gellman at Morris Yorn.