Archives
« ‘Halo Infinite’ Trailer: This son of a gun is a launch title for the next Xbox, which arrives Holiday 2020!
‘Carrion’ Trailer: A “Reverse Horror” game where you play as the monster. It got ‘The Thing’ feels and I’m here for it! »

Astronomers have a found “deep structure” under Moon’s largest crater. We caught ya, Illuminati! 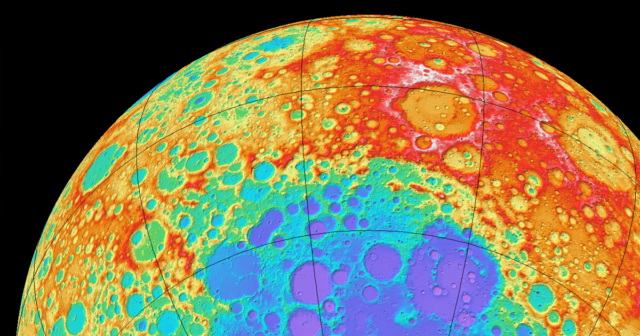 Whelp, we’ve finally found the bastards’ moon base. You know, the Illuminati. How do I know? You see, astronomers have found a “deep structure” under the Moon’s largest crater. Can’t fool me.

Mass Anomaly
A team of astronomers found a “large excess of mass” under the Moon’s largest crater, the Aitken basin — likely a relic from an ancient asteroid impact event, but perhaps something much stranger.

“Imagine taking a pile of metal five times larger than the Big Island of Hawaii and burying it underground,” said lead author Peter B. James from Baylor University in Waco, Texas in a statement. “That’s roughly how much unexpected mass we detected.”

Asteroid Shrapnel
The strange mass extends to “depths of more than 300 km [186 miles]” according to the researchers’ paper, which was published in the journal Geophysical Research Letters earlier this year.

To find the mass, the researchers looked at changes in the strength of gravity around the Moon by analyzing data from NASA’s Gravity Recovery and Interior Laboratory (GRAIL) mission.

Moon Magma
Computer simulations suggest that the crater could have been created by an iron-nickel core asteroid that spread out into the upper mantle of the Moon during impact while the metal “could remain suspended in the Moon’s mantle until the present day, rather than sinking to the Moon’s core,” James said.

Another theory floating around as to what the mass might be the result of: lunar magma ocean solidification, or the process in which a once molten Moon surface solidified over billions of years while forming dense oxides.