Archives
« ‘Once Upon A Time In Hollywood’ Trailer: Anybody Order Fried Sauerkraut?!
Sony dropped an insane amount of PlayStation 5 details at a corporate meeting, so check them out right the fuck here! »

Pluto has a buried ocean kept liquid by a layer of gas. And, it may contain life! Gimme a hell yeah! 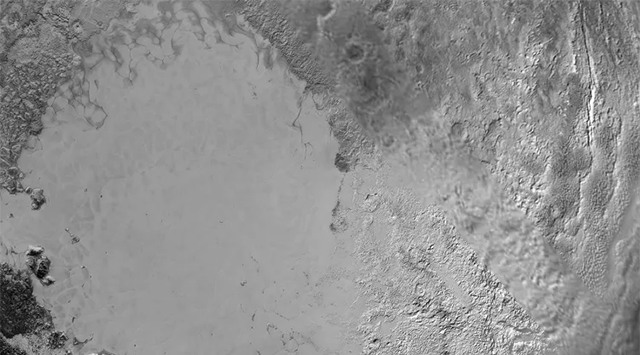 Got a couple of really rad news and notes regarding the solar system’s favorite non-planet, Pluto! First up! The planet may harbor a buried ocean! Second up! Said oceans may harbor life.

Icy Dwarfs
Japanese scientists say that liquid-water subsurface oceans on Pluto are kept from freezing over thanks to an insulating layer of gas hydrates — a discovery that could mean the distant dwarf planet and other inhospitable habitats could potentially harbor life.

“This could mean there are more oceans in the universe than previously thought, making the existence of extraterrestrial life more plausible,” Shunichi Kamata, lead author from Hokkaido University, said in a statement.

Subsurface Oceans
Conventional wisdom dictates that oceans found on dwarf planets like Pluto should’ve technically frozen long ago. But according to the team’s computer simulations, which go back about 4.6 billion years — around the time of the formation of the solar system — these oceans would have no chance to ever freeze over.

The new study, published in the journal Nature Geoscience this week, found that it would “only” take one million years to freeze over without an insulating gas layer — but more than one billion years with one.

On Pluto, such a subsurface ocean could still exist to this day thanks to methane and nitrogen gas found in Pluto’s atmosphere. Other icy moons could also host such subsurface oceans as well.