Archives
« Edgar Wright’s next movie is a horror-thriller set in London and I’m fucking here for it
Monday Morning Commute: Check Out That Fucking Sunset! » 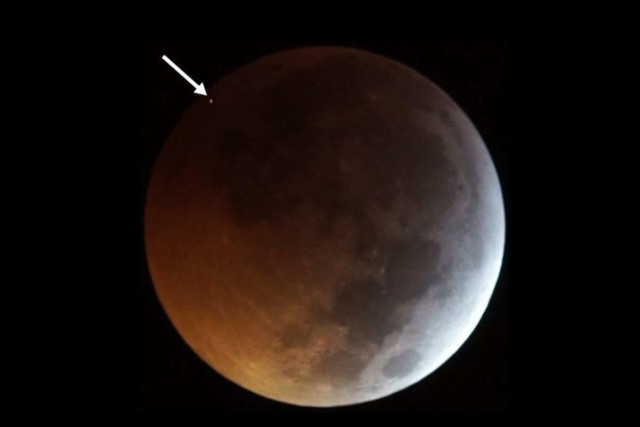 A lunar eclipse is already pretty fucking bad ass, you know? But, you know what’s even more bad ass? A meteorite striking the Moon during it.

Observers of yesterday’s lunar eclipse were blessed with the first known sighting of a meteorite impact during such an event.

The so-called “super wolf blood moon” was eagerly watched by millions of people around the world, mostly via live streaming video. During the eclipse, some people noticed a tiny flash, a brief yellow-white speck, popping up on the lunar surface during the online broadcasts.

One Reddit user raised the possibility that this was a meteorite impact and others scoured eclipse footage for evidence of the event. A flash is visible in at least three different videos.

Jose Maria Madiedo at the University of Huelva in Spain has confirmed that the impact is genuine. For years, he and his colleagues have been hoping to observe a meteorite impact on the moon during a lunar eclipse, but the brightness of these events can make that very difficult – lunar meteorite impacts have been filmed before, but not during an eclipse.
Read more: NASA puzzles over ‘invisible’ moon impact

On this occasion, Madiedo doubled the number of telescopes trained on different parts of the moon – from four to eight – in the hope of seeing an impact. “I had a feeling, this time will be the time it will happen,” says Madiedo.

After the eclipse, software automatically pinpointed a flash in imagery recorded by several of his telescopes. This helps to confirm that the flashes seen by live stream-watchers were not just optical anomalies on camera sensors.

“I was really, really happy when this happened,” says Madiedo. He notes that the flash was quite bright and it struck the moon at a moment when the eclipse was not overly luminous itself, perhaps making the strike easier to detect.

Although he has not yet formally calculated an estimate for the size of the space rock that collided with the moon, Madiedo thinks it probably weighed about two kilograms and was roughly the size of a football.

“The combination of a darkened surface and a lot of people watching made it much more likely that the flash of impact was seen – and it reminds us that the solar system is still a very dynamic place,” says Robert Massey at the Royal Astronomical Society.