David Fincher and ‘Deadpool’ director are teaming-up for animated anthology on Netflix. Gimme a Fuck Yeah! 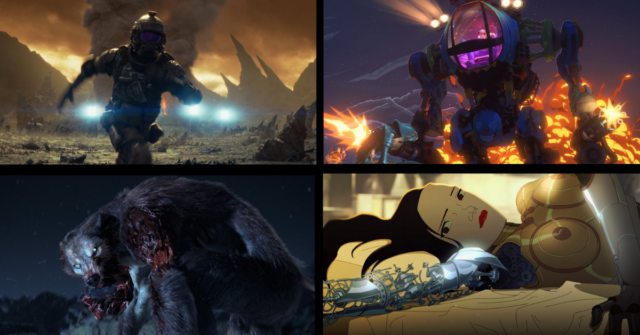 Straight and to the rad-as-fuck point: David Fincher and Tim Miller are teaming-up for an adult-oriented animated anthology on Netflix.

Tim Miller (Deadpool) and David Fincher (Fight Club, The Social Network) are officially joining forces to executive produce an adult-oriented animated anthology series for Netflix. Love, Death & Robots will include 18 episodes, animated in different styles and covering a range of genres, from science fiction and fantasy to horror and comedy.

A different team of animators worked on each separate episode, ensuring that every individual episode has its own distinct style. The shorts range from photorealistic 3D to traditional 2D, with varying styles in between. According to the teaser tweeted by Netflix’s NX account, the subjects of the shorts delve into everything from sentient dairy and werewolf soldiers, just to name a few wacky elements on the list.

“Love, Death & Robots is my dream project,” said Miller in a press release. “It combines my love of animation and amazing stories.”

The anthology series comes in a recent push from Netflix for animation. Recently, the streaming company announced it would be opening up its own in-house animation studios. In addition to properties such as BoJack Horseman, Big Mouth, The Dragon Prince and She-Ra and the Princesses of Power, Netflix announced it would be adapting the works of Roald Dahl into an animated series. Neon Genesis Evangelion will also stream on the platform starting this spring, as Netflix adds more anime content. Love, Death & Robots will mark another foray into animated properties, this time geared towards adults.

“I’m so fucking excited that the creative landscape has finally changed enough for adult-themed animation to become part of a larger cultural conversation,” said Miller.