Archives
« “Mean” Gene Okerlund has died at age 76. This one feels particularly bad to me, my dudes
Watch: ‘Undertale’ creators made a promo for Kenny Omega for Wrestle Kingdom 13. This is the dopest thing ever! »

NASA releases first clear picture of Ultima Thule, the farthest object ever explored by a spacecraft! 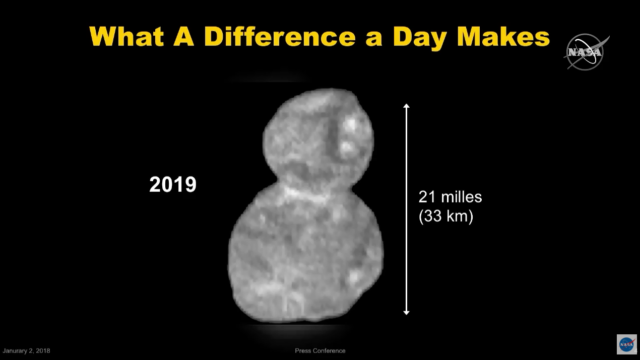 Look at this Frosty The Snowman-lookin’ motherfucker! It’s none other than Ultima Thule, the farthest object ever explored by a spacecraft. Space, my friends, is fucking rad.

The New Horizons team has released the first high-resolution images of (486958) 2014 MU69, nicknamed Ultima Thule, the furthest object ever explored by a spacecraft.

New Horizons launched in 2006 and flew by its initial target, Pluto, in 2015. NASA then extended the mission to analyze a new target, a Kuiper Belt Object called (486958) 2014 MU69, or MU69 for short. Ultima Thule is a temporary nickname until a formal name is selected, likely this year.

The probe reached its target on New Year’s Day at 12:33 am ET, though the signal traveling at light speed didn’t reach Earth until yesterday morning. New Horizons has been releasing blurry photos of the object and has detected some weirdness about it, as we’ve reported—there didn’t seem to be any variation in the amount of light it reflected. Though it appeared to be bowling pin-shaped, its actual structure has remained hazy until now.

The new image, the furthest photo ever taken, answers that question: It’s a very dark red, two-lobed object that is 21 miles (33 kilometers) long and 10 miles (16 kilometers) wide. It appears to be a “contact binary,” a common shape for distant comets, as reported by the Planetary Society. It’s not totally clear how these shapes form, but it’s thought that they begin as two objects orbiting one another that merge.

New results confirmed that the object rotates with a period of 15 hours or so, and is very dark, reflecting only 6 to 13 percent of the incoming sunlight, Cathy Olkin, a planetary scientist at the Southwest Research Institute, said in a press conference. The researchers learned that the unexpectedly low variation in the light curve came from the shape—two spheres rotating have a smaller change in their surface area from the spacecraft’s point of view than an ellipse would. The rock had no obvious impact craters.

Kuiper Belt Objects, of which Pluto is the largest, are especially interesting because they are thought to retain some of the Solar System’s original building material, left undisturbed after billions of years. New Horizons scientists have begun to analyze the first data sent back by the spacecraft.

Data and images will continue to come in throughout the day, with more announcements to come soon.