Archives
« ‘Punisher’ Season 2 Teaser Trailer: Frankie is back to work on January 18!
NASA releases first clear picture of Ultima Thule, the farthest object ever explored by a spacecraft! »

“Mean” Gene Okerlund has died at age 76. This one feels particularly bad to me, my dudes 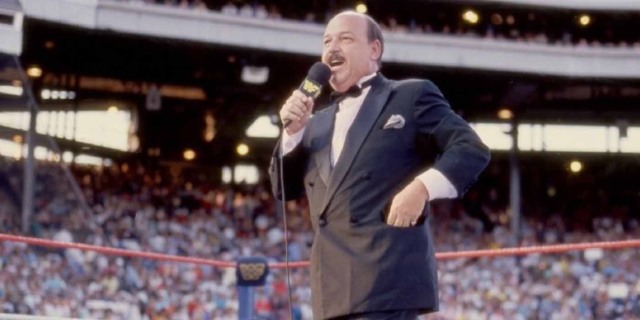 An inestimably large part of my childhood has sloughed the mortal coil today, friends. Here’s to him helping cut glorious promos in the sky with Macho Man and others.

“Mean” Gene Okerlund, the longtime broadcaster for WWE, has died. He was 76.

WWE revealed the news of Okerlund’s death on Wednesday but did not say how he died or when.

Okerlund, who was given his nickname by the sport’s star-turned-former Minnesota Gov. Jesse “The Body” Ventura, got his start at Omaha radio station KOIL before moving to Minneapolis, where he worked for a local TV station.

In 1970, he segued to wrestling, serving as a fill-in for announcer Marty O’Neill at the American Wresting Association before becoming O’Neill’s permanent replacement several years later. He left the AWA in 1983 to join the World Wrestling Federation (later renamed the WWE), where he interviewed such stars as Hulk Hogan, “Macho Man” Randy Savage and The Ultimate Warrior. Okerlund also hosted WWF shows including All-American Wresting and Tuesday Night Titans.

In addition, Okerlund performed the National Anthen at the first WrestleMania, in 1985, and contributed a cover of “Tutti Frutti” on WWE’s The Wrestling Album later that year.

In 1993, he moved over the World Championship Wrestling before returning to WWE in 2001 to serve as a commentator on the Gimmick Battle Royal at WrestleMania 17 alongside Bobby “The Brain” Heenan. He also was a cast member on WWE Network’s reality show Legends’ House in 2014 and two years later signed on as narrator of the channel’s animated series WWE Story Time.

In January 2018, Okerlund appeared on the 25th anniversary episode of Raw, where he interviewed A.J. Styles.

Okerlund was inducted into the WWE Hall of Fame in 2006 by Hogan, who tweeted: “Mean Gene I love you my brother” upon news of his death.

Added wrestling star Triple H: “A voice and sound track to an entire era of our industry. He was the star of some of @WWE’s most memorable segments. “Mean Gene” was beloved by all who got to work with him. Our thoughts are with his family at this difficult time.”