‘Stranger Things’ returns this Fourth of July. One wonders what they’ll rip-off next! 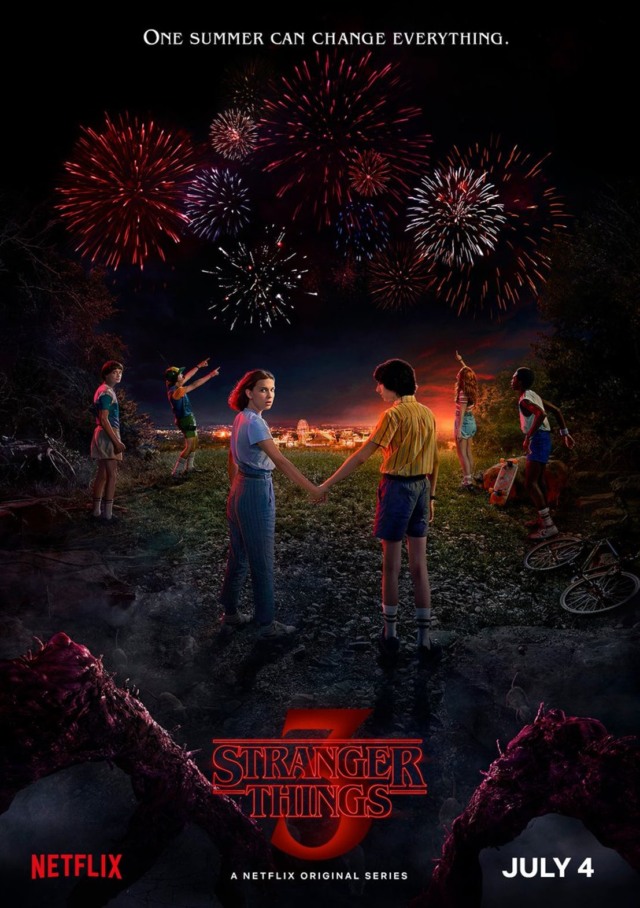 This news is going to excite a lot of people. I am not one of those people.

Set during the summer of 1985, this season will see the show’s core characters begin to drift apart as they grow up, which is apparent in the show’s official poster.

Underneath the tagline, “One summer can change everything,” the poster shows Millie Bobby Brown’s telekinetic Eleven holding hands with Finn Wolfhard’s Mike while Gaten Matarazzo’s Dustin, Caleb McLaughlin’s Lucas, Noah Schnapp’s Will and Sadie Sink’s Max stand in the background. As the others admire the fireworks over Hawkins, Indiana, Eleven notices a creature from other-dimensional Upside Down, possibly the Mind Flayer from Season 2, closing in on the unsuspecting kids.

While details on the third season of Stranger Things are still somewhat scarce, Netflix revealed the titles of all eight episodes of the show’s upcoming season in a teaser last month. Earlier last year, Cary Elwes joined the show’s cast as the corrupt Mayor Kline, and Jake Busey joined the show as Bruce, a journalist for The Hawkins Post with “questionable morals.”

Series creators Matt and Ross Duffer also announced Stranger Things 3: The Game, an isometric action game for the Xbox One, Switch and PC. that will follow-up on the events of Stranger Things Season 3.