Archives
« Views From The Space-Ship: something of a green thumb
‘Guardians of the Galaxy Vol. 3’ put on hold indefinitely. Meanwhile, Taika Waititi recently met with Marvel. Please, yes, please. » 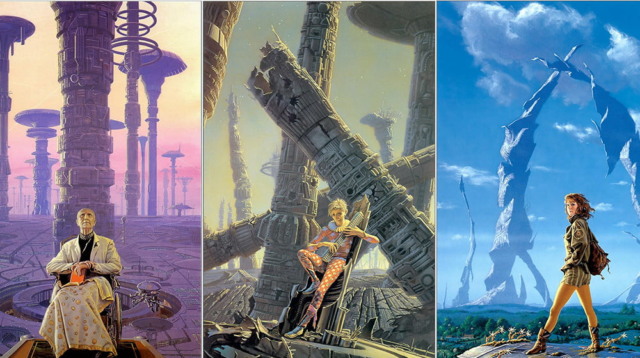 The cool: The Foundation series is being made into a TV show. The potentially not cool: It’s being done through yet another streaming service, this time’s Apple’s. The definitely not cool: David fucking Goyer is involved. Verdict? Uncertain.

Apple is moving forward with their previously-announced Foundation TV series. The Isaac Asimov adaptation has landed a 10-episode straight-to-series order for Apple’s fast-developing streaming service. Batman v Superman writer David S. Goyer and War of the Worlds writer Josh Friedman will serve as executive producers and showrunners on the series, which will try to turn Asimov’s complex saga into something cinematic.

Deadline confirms the news that Apple is making Foundation a reality. Asimov’s Foundation series is complex and sprawling, so let’s turn to the always-accurate Wikipedia for a breakdown on the basic story:

The premise of the series is that the mathematician Hari Seldon spent his life developing a branch of mathematics known as psychohistory, a concept of mathematical sociology. Using the laws of mass action, it can predict the future, but only on a large scale. Seldon foresees the imminent fall of the Galactic Empire, which encompasses the entire Milky Way, and a dark age lasting 30,000 years before a second great empire arises. Seldon’s calculations also show there is a way to limit this interregnum to just one thousand years. To ensure the more favorable outcome and reduce human misery during the intervening period, Seldon creates the Foundation – a group of talented artisans and engineers positioned at the twinned extreme ends of the galaxy – to preserve and expand on humanity’s collective knowledge, and thus become the foundation for the accelerated resurgence of this new galactic empire.