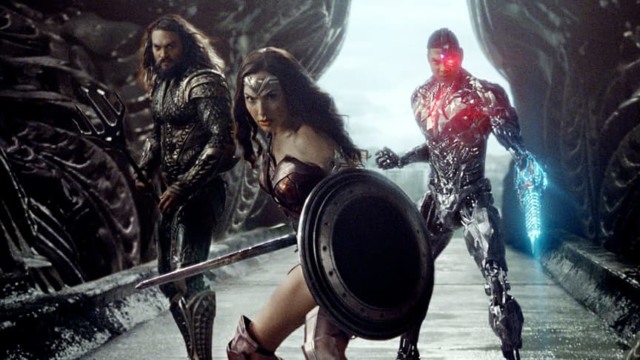 Ah, no no, say the Warner Bros executives. All those rumors about a troubled reshoot for Justice League are just that, rumors! Fake news! No one follow the scent of sizzling turd to the diarrhea-covered Dumpster Fire known that is the Justice League movie.

Man, Whedon. You got your work cut out for you.

Poor Justice League. No matter how much good Warner Bros. does, the upcoming pic just can’t catch a break. Even after the smashing success of Wonder Woman, and a thrilling Comic-Con trailer for Zack Snyder/Joss Whedon’s team-up film that was very promising, negative buzz continues to surround it. That doesn’t change today, either, with a follow-up report coming in that expands a bit on what we heard last night.
To recap, yesterday we learned that Warner Bros. was apparently unhappy with a few things in Justice League. Namely, the tone – which they felt was too dark – and the portrayal of Cyborg. Now, Batman-On-Film has added onto that, telling us that the situation is much worse than it appears. Here’s what they had to say:
These reshoots – which are still taking place – are not standard pick-ups/additional photography. Why? Apparently, an early cut of the film was deemed “unwatchable.” Thus, substantial changes to the film were ordered.

If DCEU fans were tentative regarding Joss Whedon taking over post-production and “complicated” reshoots of Justice League from Zack Snyder, a new development may feed those worries. /Film is reporting that Whedon has scrapped Snyder’s original ending — which was supposed to end on an epic cliffhanger with Darkseid’s arrival — now tailoring reshoots to end the film “like a movie.”

The site elaborated that Snyder’s vision, which is based on Steppenwolf starting Apokolips’ invasion of Earth by collecting Mother Boxes, was slated to culminate with his master Darkseid arriving on Earth to set up the sequel. They reported that this ending “has been completely removed” and Whedon’s film “doesn’t end on a huge cliffhanger now.”

The report notes, “Steppenwolf is trying to get the Mother Boxes and he’s trying to get the Earth ready for the coming of Darkseid. And the original ending of the movie from what I understand was, he was kind of playing the Silver Surfer role, with Darkseid playing the Galactus role, and the ending of the movie was a cliffhanger and Justice League 2 was going to be Justice League vs. Darkseid… Darkseid arrives at Earth.”