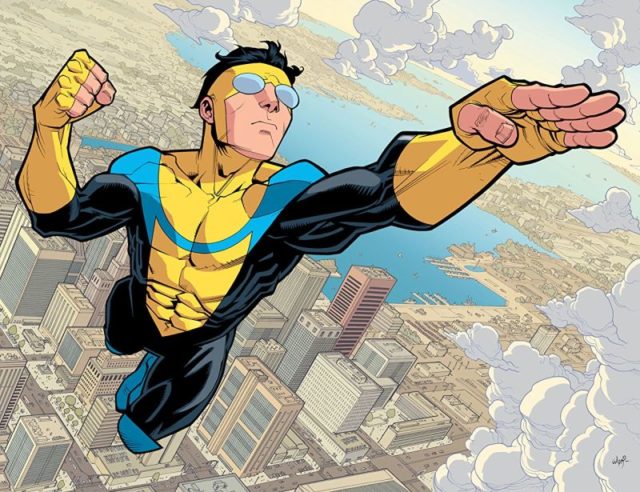 At least according to its first season, stoner meat head lazy comedian Seth Rogen did a great job at not doing a great job of adapting the comic Preacher for TV. Not content ruining just one comic property (I’m doubling down here folks, I actually don’t really care this much), Rogen has turned his sights on another. Robert Kirkman’s Invincible.

Invincible, the superhero book created by Robert Kirkman of The Walking Dead fame, would seem to be a slam dunk for a big-budget blockbuster. After all, not only do you have Kirkman involved, but superhero movies make enormous bank at the box office. And it appears another comic book-adapting duo, Seth Rogen and Evan Goldberg, are stepping in to make it happen as writers and directors.

Invincible is the story of Mark Grayson, son of Omni-Man, a superhero with a quiet alter-ego as a novelist and a house in the suburbs. Mark, fully aware of his dad’s alien origin, finally gets his powers and quickly becomes embroiled in Earth’s complex superhero bureaucracy, alien invasions, and personal betrayals. While Invincible has never quite had the profile of The Walking Dead, which hit the shelves the same year Invincible got his own series, it’s been widely beloved by comics readers for toying with or even outright destroying superhero tropes, including a shocking twist early on that forced readers to completely reevaluate what had happened in the book so far. One thing likely stalling the movie is that while Invincible generally has a cheery tone, it’s very blunt about matters of superhuman sex, exactly what happens to innocent civilians if a hero makes a mistake, and some surprisingly violent on-page deaths that’d be hard to translate without an R-rating.

Rogen, of course, is best known for his big-screen comedies, but he and Goldberg turned heads by adapting DC’s beloved, bizarre Preacher comics into a superb TV series that kept the spirit of the comics while doing its own thing. It’s an interesting choice, not least because Rogen and Goldberg showed a surprisingly balanced sensibility between bizarre gross-out humor and genuine character development. We’ll see where they take it as things unfold.

(via The Hollywood Reporter)