Archives
« Elektra Will Be In ‘The Defenders’, Hopefully Surprising No One
‘Valerian’ Trailer: Luc Besson’s Space Opera Looks Stunning » 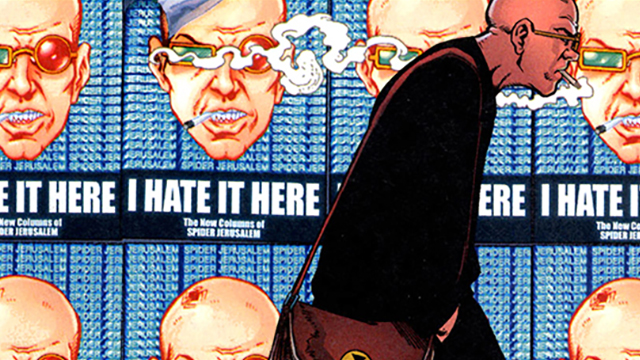 It’s Election Night in America. In fact since I’m tardy writing this (I’m always tardy writing this, this semester!), I’ve had the distinct pleasure of turning off Early Results, closing my Twitter, and instead retreating here. To what has been so admirably dubbed my Space-Oasis, the Space-Ship Omega.

I have no profundities to offer about this Election Cycle. I’ve spoken with countless people from a wide variety of of lifestyles, about this Election. Upper class affluent white men. First generation college students whose parents fled war-torn countries. Highly educated African American women. Rich Muslims from Saudia Arabia. Poor Muslims from our own Dorchester. Those from the Midwest, those from the coasts, those who like guns, hate guns, fear Muslim immigrants, believe it is our imperative to take in Muslims. Homosexual women, bisexual men, transgender women, cisgendered men, married people, single people, people who wished they were married, people who wished they were single.

By and large, with exceptions abound, everyone I spoke with, interacted with, attempted to have honest face-to-face conversations with, were just people trying to get by in the world. And if there could be more recognition between members of the country that we are all in fact Human usually just trying to Get Through The Fucking Day, it would do society at large a lot better. Humanity has been drained from our intellectual discourse, along with, well, intellect.

This is no profundity, again, I told you I didn’t have any, so don’t fucking hold me to a promise I didn’t make, but.

Intellectual discourse been replaced with raw emotion, side-stepping the brain-piece, and operating within the Palace of Spectacle and Gut. All of us, operating within a Palace of Spectacle and Gut. Within this Palace, there is no humanity. There is Us and Them (the parameters for what constitutes both Us and Them constantly changing depending on who you are, and where you are).

I’m just rambling here, trying on a bunch of different ideas, subscribing to none (perhaps), but finding myself interested in many (perhaps).

I tell my students, and I genuinely believe it, that it’s okay to be friends with those who don’t believe what you do. In fact, it’s probably better off getting yourself out of your EchoChamber, and finding someone who holds contrary beliefs. Test your own beliefs out against someone else’s. Do yours hold up? Do they not hold up? Are you suffering confirmation bias? Cognitive dissonance? Verbal Diarrhea? Textual Diarrhea?

I try to replicate that Idealized Bubble in my classrooms. I cherish dissent from my own opinions, which I own up to in front of them. I cherish dissent between students, so long as they’re being polite about it. Let’s leave room for disagreement, and still want to grab a fucking cheeseburger after the discussion.

It’s probably telling about my priorities in life, but I can think of few things I would enjoy more than grabbing a good fucking cheeseburger with someone.

So I tell them, so I do tell them indeed.

But I don’t think we really get those cheeseburgers much anymore. ‘Cause I Believe What I Believe and if You Don’t Believe It well Fuck You. No one’s really interested in the human being behind the beliefs anymore. Why they feel the way they do, why they think the way they do.

Again, no profundity here. None promised, none offered.

But if I can really leave you with anything, if I could offer you a glimmer of thesis in an unabashed, stream-of-consciousness deluge of banality, it’s this. Just treat people like they’re fucking human, man. Until they’re a dick to you, and maybe even after that. Realize they’re just another wind-sucking bag of meat-and-sticks powered by electricity. We can differ in opinions, in how the world works, how we look, which Sky Guy we worship, but at the end of the day we are all motivated by very similar Existential Check Lists.

Maybe, just maybe, if we can begin to respect the humanity in others, the discourse can come. Bob from Wyoming, Salwa from Saudi Arabia, Clyde from Florida, Chanika from Indonesia. A lot of our lives may be dissimilar shit, but a lot of our lives we’re all sitting on a toilet trying to take a shit.

This is what I’m up to this week.

A weekend in Portland with Riff, Eduardo, and Others

What’s up with you, fellow humans?